Yekaterinburg is a wonderful city of millions, located in the heart of our country, at the junction of Europe and Asia. The capital of the Urals with a long history dating back to 1723. The dynamically developing megalopolis that managed to keep and harmoniously combine its authenticity with the modern architecture and technical progress.

The aesthetics and charm of Yekaterinburg can leave no one indifferent, being here for the first time, you can get confused by the variety of sights, monuments, historical sites and just beautiful locations. But there are places that are a calling card of the Ural capital, if you decided to get acquainted with the city, they should be visited first of all.

Church on the Blood 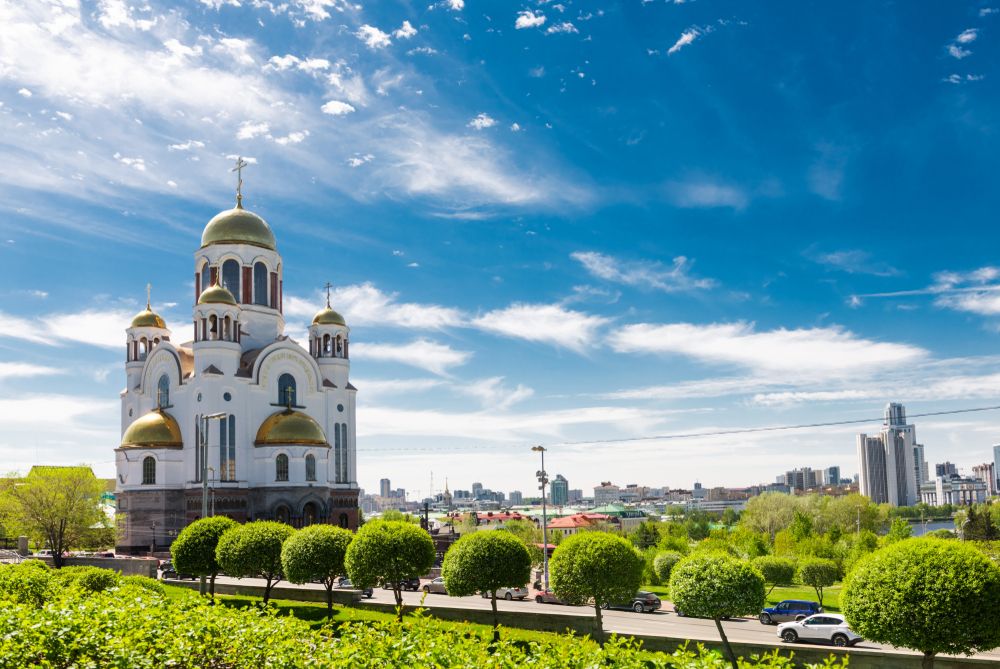 Undoubtedly, one of the main attractions is the Orthodox Church, built on the site of the house where in 1918 the family of Nicholas II was shot. Every year the temple attracts thousands of Orthodox pilgrims from all over the world. A two-tiered temple with five domes stands near the city pond in the center of the city; and a memorial sculpture depicting a tragic moment in history has been erected near the temple. Here you can visit the Patriarch’s Metochion where the Museum of Sacred Royal Family of the last Russian Emperor is located. You will have a chance to immerse yourself in the atmosphere of the royal times, get acquainted with the personal belongings and household items of the Romanov family, examine documents and photographs of the difficult period of exile. 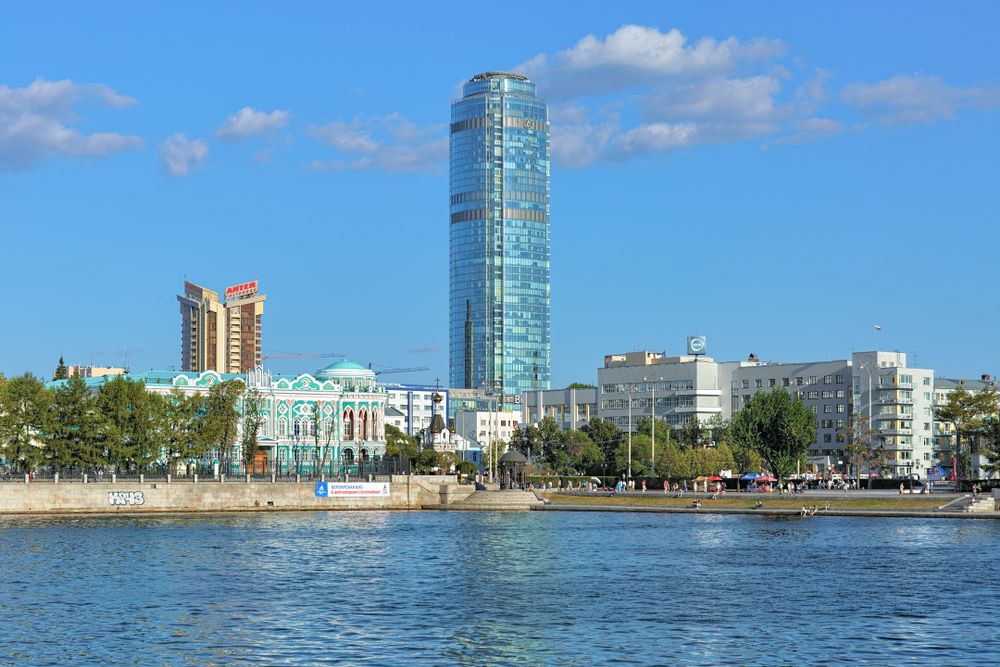 A modern skyscraper in the center of Yekaterinburg

Vysotsky was until recently the highest skyscraper in the Urals, with a height of 188.3 meters. On the 53rd floor of the building there is a roundabout observation deck, which offers a spectacular view of Yekaterinburg. Best time to visit is considered the hour before sunset, when the setting sun colors the city with the most diverse palette of warm colors. From the site with binoculars you can see the city for more than 25 kilometers: houses, stadiums, humming streets, blooming parks and the Iset River playing in the sunset, which carries its waters straight through the city. A museum dedicated to the life and works of Vladimir Vysotsky was opened in the basement of the skyscraper. Native Soviet-era aesthetics, several halls filled with authentic possessions of the legendary poet, actor and author-performer are waiting for you. 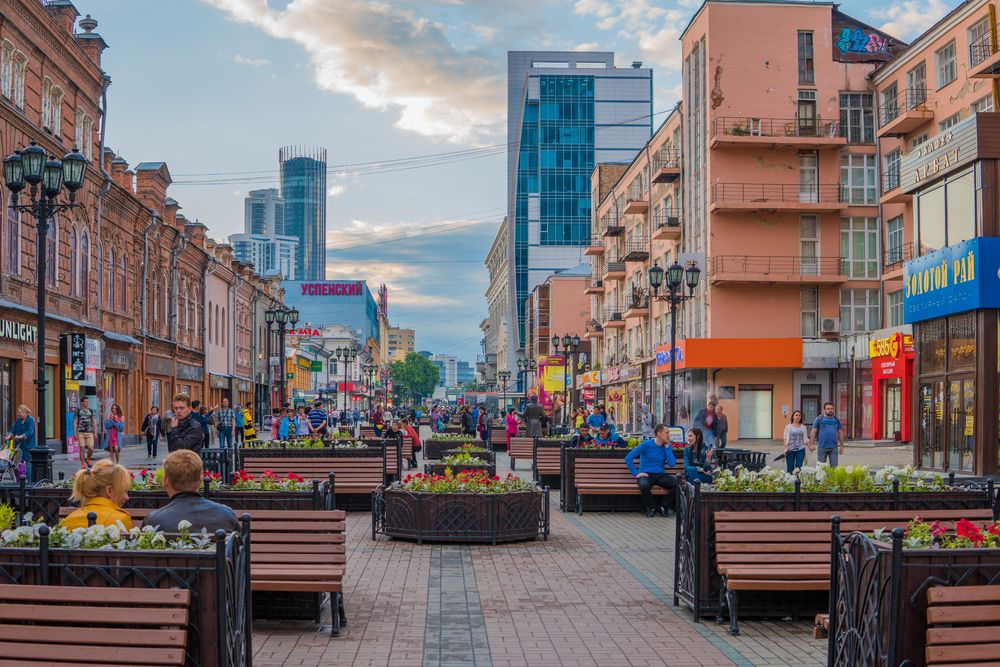 “Ural Arbat” – the oldest street in the central part of the city. Many historical heritage sites are concentrated here, as well as a number of sculptures and installations, erected in modern times. This pedestrian street is a great place for walking and rest: the sounds of music, a succession of elegant benches, street lamps, colorful flowerbeds and small cafes create an unforgettable atmosphere of a cozy place, where you want to come back.

Dam on the River Iset 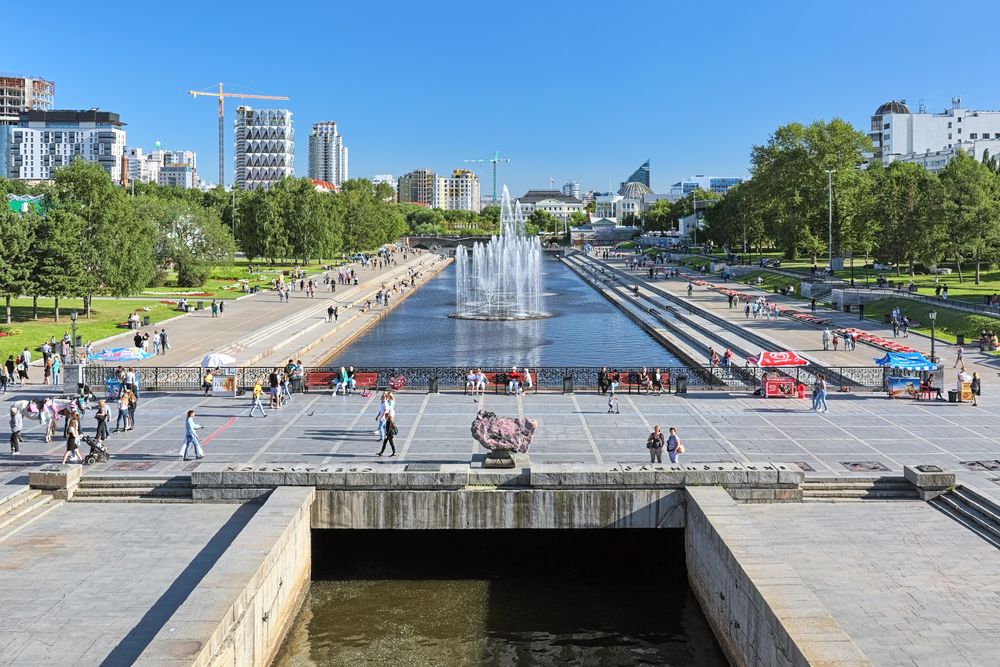 In the city this place is called “Plotinka” – it is a technical dam on the River Iset, it was its construction that began construction of the city by its founders Tatishchev and Genin. Today this is one of the most romantic places in Yekaterinburg. A place where dates are arranged, where newlyweds traditionally come immediately after the marriage ceremony. At this site, a ridge of fountains is installed directly in the river, whose splashes sparkle on the concrete steps. At any time of the day or night, Plotinka is popular with the townspeople: during the day – enthusiastic children who come with their parents to feed the ducks and eat ice cream run here, skaters, scooters and cyclists ride on the dedicated paths. In the evening – the benches are filled with couples in love, and the sites are filled with street musicians. In several places pianos are installed, on which anyone can play, because “No punishment for music”, as the inscription on the instrument says.

Yekaterinburg is deservedly called theatrical center, more than 20 theaters are located here. Ekaterinburg Opera and Ballet Theatre, the creative heart of the city with more than a century of history, is the city’s heritage. At all times, the theater has been famous for outstanding talents, which gained fame not only within the country, but also far beyond its borders. Today it is a modern theater, keeping up with the times, without losing its classic traditions, built up over a long and rich history.