Vyborg is a city with impressive nature and lots of beautiful places for a memorable vacation. It is located near St. Petersburg. The city is known for its rich historical past, well-developed infrastructure and plenty of opportunities for unforgettable vacations.

Vyborg’s history began as early as the 11th century, when the first settlement arose on the site of the Monrepo Park. The modern city is a major industrial, historical, tourist and cultural center. Vyborg hosts a large number of interesting festivals and holidays, such as a festival dedicated to Russian cinema, knights tournaments, and various music and dance festivals.

Among the main attractions of Vyborg are the famous Monrepo Park, Vyborg Castle and the Alvar Aalto Library. The center has preserved the features of the medieval old town, ancient manors and parkland of the 19th century. The total number of monuments and objects of cultural heritage in Vyborg is about three hundred. In general, the city is considered one of the most beautiful in the Leningrad region. The distance to St. Petersburg is 130 km.

The city’s main sight and its main symbol, of course, is the Vyborg Castle. It was built in the 13th century by Swedish crusader knights during their third military campaign in Karelia, which at that time was formally owned by the Novgorodians. The castle was founded in 1293. This date is also considered the date of the city foundation. 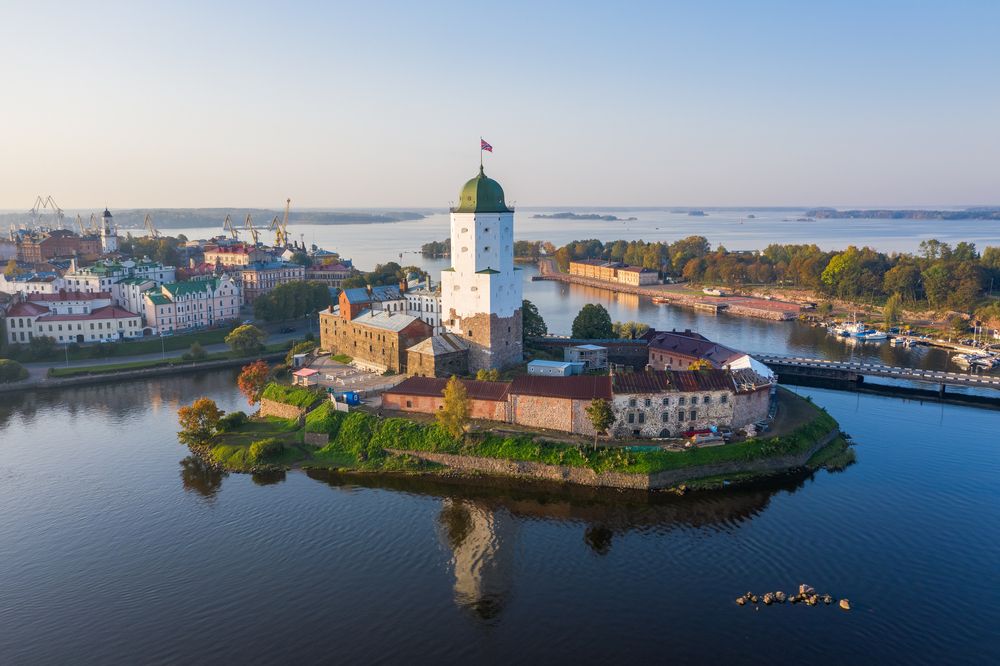 The main attraction of the city – the castle of Vyborg

The first attempts to conquer the Karelian lands were unsuccessful. But later, in 1293, Swedes landed at the shore of Gulf of Finland under the command of Marshal Thorgils Knutsson, pressed Karelians and started to build the castle. So the Swedes had seized a strategically important location, giving Russia its only access to the Baltic Sea. Later, the Swedes also conquered the lands of southern Karelia.

For many centuries these lands belonged to the Swedish king until in 1710 Russian troops under the command of Peter the Great liberated Vyborg from the Swedes. But the castle was badly damaged. By order of the tsar, it was restored and became a stronghold and border to protect the Russian lands. After several centuries, having lost its military significance, the castle began to decay. It has been restored several times, and in the middle of the last century it housed a historical museum, which opened its doors to visitors in 1970.

Originally the clock tower was the bell tower of the cathedral, erected here in the 15th century and a century later reinforced with stone walls at the expense of the city. In 1600 a clock was installed on the bash. In the early 18th century there was a disastrous fire that destroyed 9 bells and the spire of the tower. Later, the clock was changed and the building was rebuilt several times. A new clock mechanism that still exists today was installed in 1848. In Soviet times an observation platform was built here, and thanks to it the clock tower is popular nowadays.

It is a unique natural reserve of national significance. On its territory collected a large number of natural and classical architectural monuments in the 18-19 centuries. The museum-reserve is located on the picturesque shore of the Gulf of Finland, where tall rough trees and a quiet sea harbor are beautifully and harmoniously shaped. 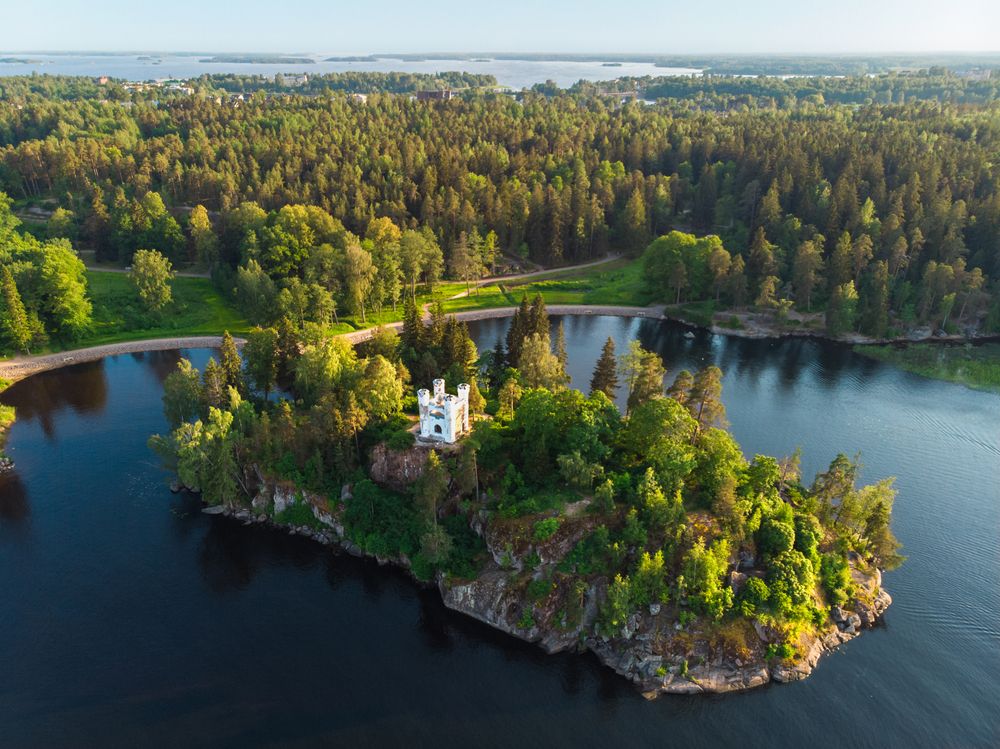 In the past, this was the trading route where ships sailed, craftsmen worked and traders sold their wares

In addition to architectural monuments, mirror-like surface of the bay and trees, you can enjoy incredible landscapes and rock scenery. If you go back in time, here was the first Karelian settlement, during the Swedish domination here were economic premises of the Vyborg Fortress. The total area of the museum-reserve is about 163 hectares. In 2010 the park turned 250 years old.

Considered an unusual architectural monument. In the past, it was the largest covered market in the Baltics and Scandinavia. Thanks to its favorable geographical location, the town has been designated a customs-free zone, and the market building has become the focal point of the town’s commercial life. Over time, as the city began to lose its defensive and military role, more space was made available for the erection of commercial and market buildings. On the first floor of the market food and household goods, fruits and vegetables are sold. Housewares, clothes and souvenirs are sold on the second floor. just as it was a hundred years ago, here you can buy groceries, original souvenirs, and much more. 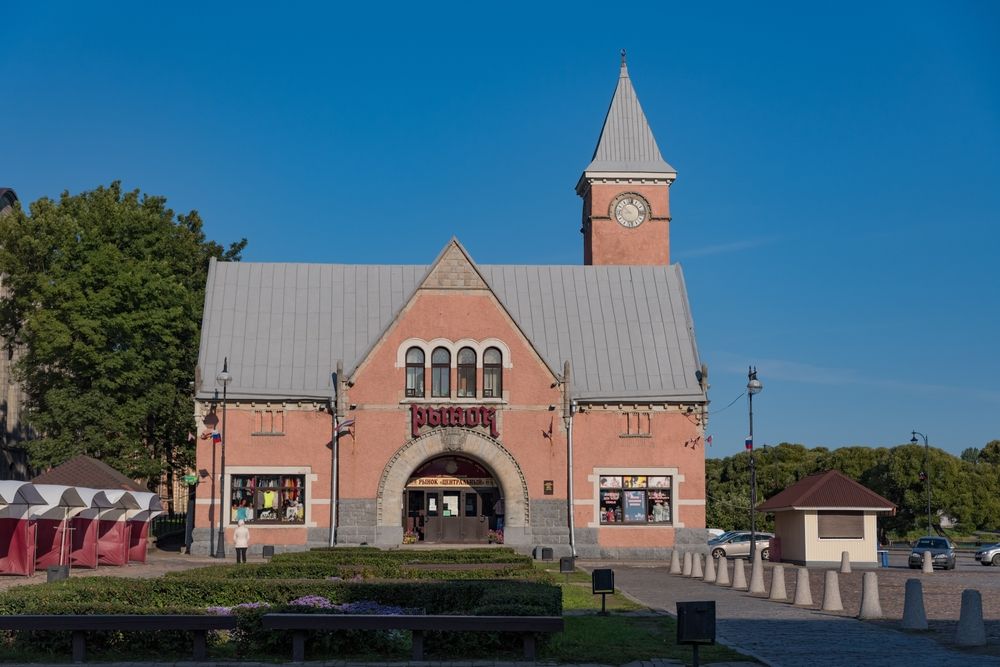 At the market you can buy and taste fresh farm products

The museum is located in the medieval castle of Vyborg. It presents expositions telling about life in the city at different historic times. It also hosts exhibitions from other major museums, celebrates national and city festivals, and hosts musical and theatrical performances and jousting tournaments. The museum has 6 thematic expositions with a separate section devoted to the history of the ancient city, its construction and the period of origin of the Vyborg castle.

House of creativity is located in a former Finnish manor house on the shore of the bay. Here you can attend crafts workshops on weaving, woodcarving, beadwork and many other no less interesting Russian crafts. Sometimes themed fairs and folk festivals with rituals are held here.

7. House on the rock

Bürger House. Nobody knows exactly who he really was: a rich merchant or an ordinary town dweller. The house, built in medieval style, has towered over the city for centuries. It is not so big, but as strong as a rock. It has survived many fires and wars, but nothing has been able to destroy it. The unusual appearance of the house is popular among tourists, especially for guests of the city, there is a souvenir shop. 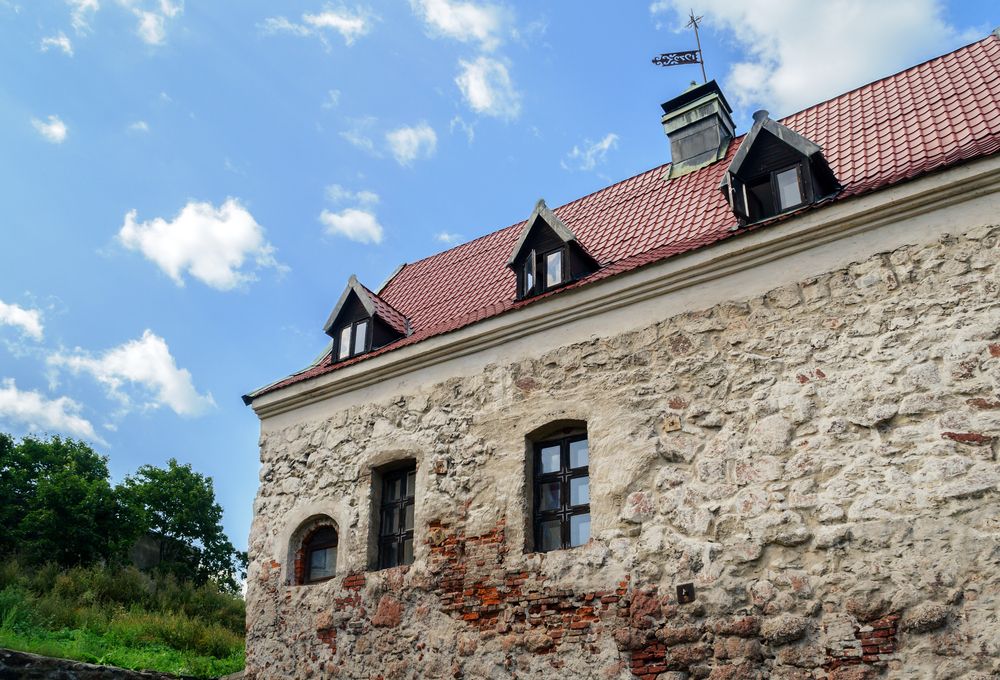 On Christmas holidays, in the courtyard of the manor they organize a show with medieval music, tasting of mulled wine, and Vyborg pretzel

A open-air museum, modeled on a Viking homestead from the 7th to the 11th century. It is located at the ninth kilometer of Svetogarsky highway. On the territory of the museum held workshops, theatrical performances and ethnographic tours. And also here they organize lectures, researches, recreate forgotten crafts and trades of the past. Earlier Middle Ages is still interesting because this is the period of formation of Russia and the time when there were known invincible Vikings who have made attacks on many lands of Europe.

For tourists here is created a good opportunity to plunge into the life of the early Middle Ages and to feel all the features of the past epoch.

The museum opened in the summer of 2010 and is now considered one of the largest in Europe. Its exhibits are located on an area of 6 thousand square meters. Most of the cars are models from car clubs, and other models were donated by vintage car owners. There are also exhibits of Retro-Union club, which gave money to create the museum. At the moment there are about 150 vintage cars here. Among them are cars of celebrities – Marilyn Monroe, Elvis Presley, Yuri Gagarin, Vladimir Vysotsky, Emperor Hirohito of Japan, Leonid Brezhnev’s ZIL.

10. The Mikhailovsky Central Park of Culture and Leisure.И. Kalinina

In 1864 there was a bastion front, two batteries, ditches, redoubts, underpasses and other constructions near this place. Later, when the fortifications lost their military significance, a city park was created there. In Soviet times it was called the Kalinin Central Park of Culture and Rest. Since the middle of the last century on its territory were held cultural events, celebrations, concerts, sports competitions, folk festivals. Over time, children’s attractions for children were installed here, athletic tracks were laid and a sports stadium was created. Till our days there are part of the ruined military fortifications.

The round tower, built in 1547, was part of the medieval defensive fortifications. Its walls are 3 to 4 meters thick and 21 meters in diameter. In 1609, an important military document on the provision of military aid by King Charles IX of Sweden to the Russian Tsar Vasily Shuisky was signed here.

Over time, the tower lost its military significance, and it began to be used to store the military arsenal and as a customs office, where visitors paid the state duty. They wanted to tear it down in the 19th century, but the building was saved by a large company that rented it for flour storage.

They appeared in 1984 after shooting the historical film “And Trees Grow on Stones”, thanks to Stanislav Rostotsky. So he made a gift to the city in the form of two drakkaras, with which the Vikings from the movie made their raids. 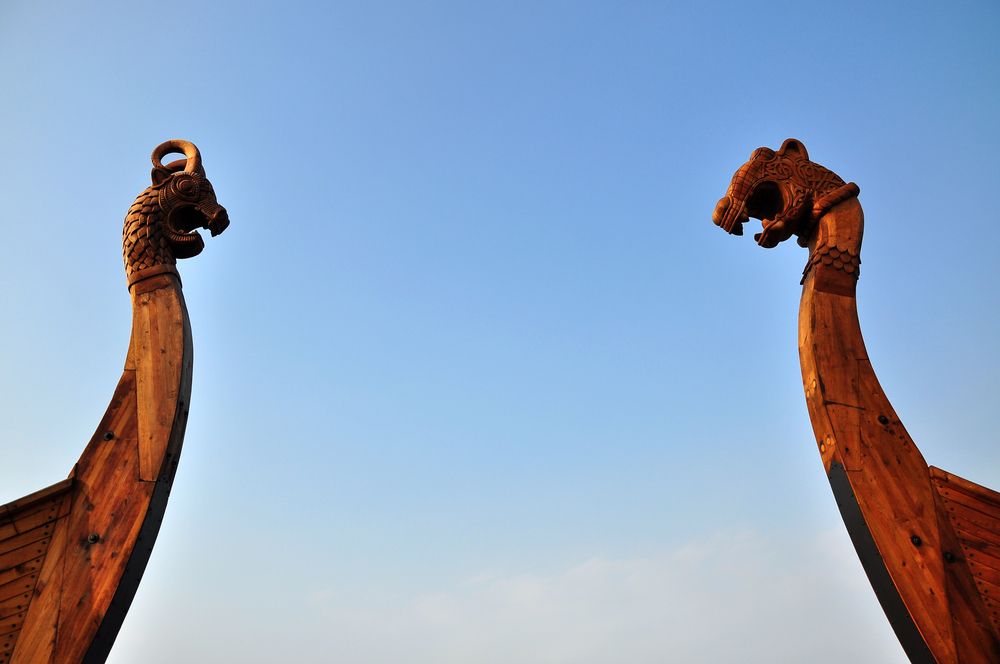 They look like two rooks, and were called so because they resembled dragons. However, they have not survived in their original form

Rooks installed now were created in 2010 by the Petrovsky shipbuilding company. Later rooks became one of the main places of interest of Vyborg and an emblem of the Window to Europe Film Festival.

As early as 1527, Vyborg received the right to receive foreign ships. The port was strategically located between Lake Saimaa, the Vuoksa River and the Gulf of Finland. Thanks to this, it quickly became a major trading port, where it traded with foreign merchants. In the 19th century, the Vyborg fleet consisted of 126 ships. Also there were passenger transportation services.

The surviving building of the harbor administration was built in 1899. It is also called a universal port, as many different kinds of cargo are transported here. Nowadays the port has 12 berths for cargo handling, and one for passenger traffic and cruises.

When coming to Vyborg for a day many tourists tend to visit the medieval part of Vyborg located on a small peninsula between the Salakka-Lahti bay and the Vyborg Bay. Both bays are connected by the Fortress Strait in the middle of which there is a small Castle Island where the Castle of Vyborg is located. 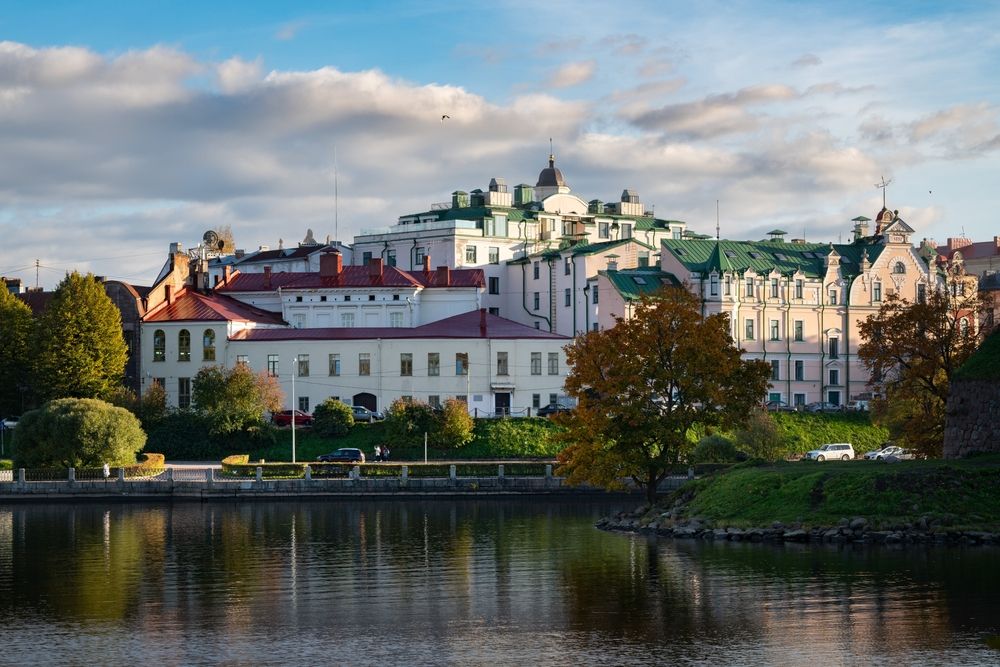 The purpose of the fortifications, to build a kind of fortress, after the end of the Great Northern War. After the successful end of the Northern War in 1722 Vyborg was incorporated back into the Russian Empire. After the victory, the city was fortified with fortresses and protective walls to defend against the Swedish invasion.

Annen’s Fortifications were considered the most important military fortifications of Vyborg. It consisted of 4 bastions arranged in a broken line and three crown-shaped fronts. Although the fortifications were built to protect the city, they were never involved in military operations, and are therefore well preserved. Officers’ quarters, barracks, and barns used to occupy the fortresses. Nowadays there are tennis courts.