Many people associate Turkey with beach vacations and all-inclusive hotels, and it seems as if sophisticated travelers cannot be interested in this hospitable country. This stereotype is refuted Cappadocia, hot air balloons which impress even those who have forgotten how to marvel.

Welcome to the fairy tale!
Every place from a bird's eye view seems to be exceptionally attractive, let alone Cappadocia, the untamed wonder of the planet! The surreal scenery of the rugged countryside with jagged gorges, colourful valleys and canyons, orchards and vineyards looks even more bizarre and surreal on a balloon ride, as if you are on another planet. Photos and videos from the Cappadocia Balloon Festivals, which are organized every two years, invariably enthuse viewers around the world. But you can't just marvel at the tale on the other side of the screen, you can find yourself in it too! 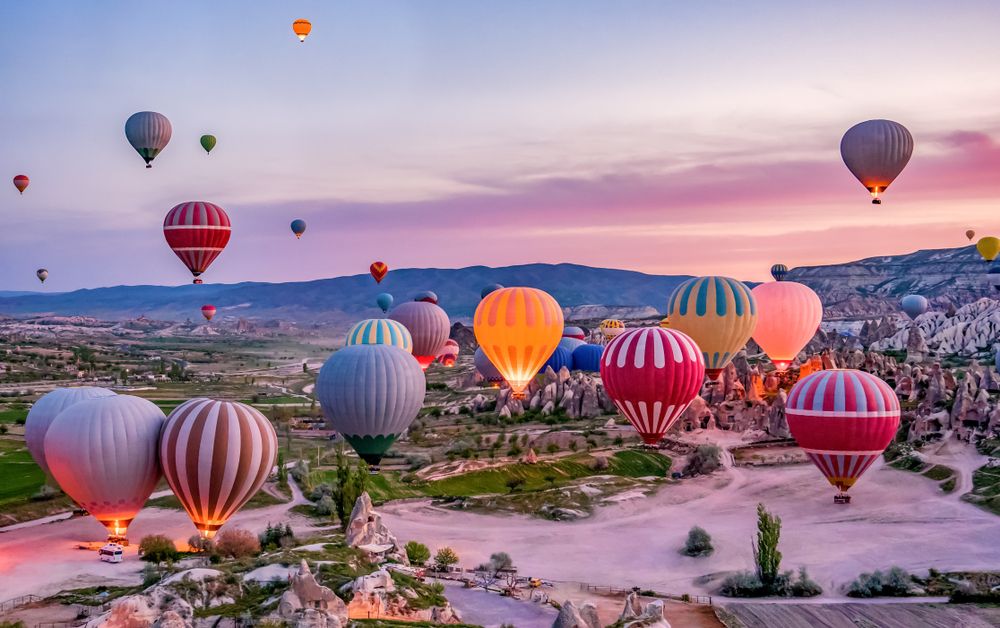 Meeting the sunrise in a hot air balloon – what could be better!
To see hundreds of balloons take off in the sky in Cappadocia, you don't have to adjust your vacation to the days of the festival – especially since it is sometimes postponed indefinitely. Flights are organized throughout the calendar year. Of course, the peak of ballooning is in summer due to the height of the tourist season in Turkey, and the warmer air and weather conditions. On the latter, by the way, directly depends the ability to fly – so do not put off familiarizing yourself with the balloons of Cappadocia at the end of your vacation, especially in the autumn and winter period. Tours are often cancelled due to high winds or heavy rains, which are not uncommon in the area. You have more chances to take off to the sky from April till mid June and from September till mid October.

Tourists often get to Cappadocia and balloons as part of an organized tour at their resort. Excursions are offered by many firms – just choose a package that suits the cost and date. It is better to book the flight in advance, because many tourists are interested in such deals. Prices for an hour-long standard excursion start at an average of one hundred dollars. For an extra fee, they offer a photographer, champagne, and lunch in the cafeteria after you land. You can arrange a romantic walk for two or go to the basket with the whole company (up to 20-24 people), which also affects the price. 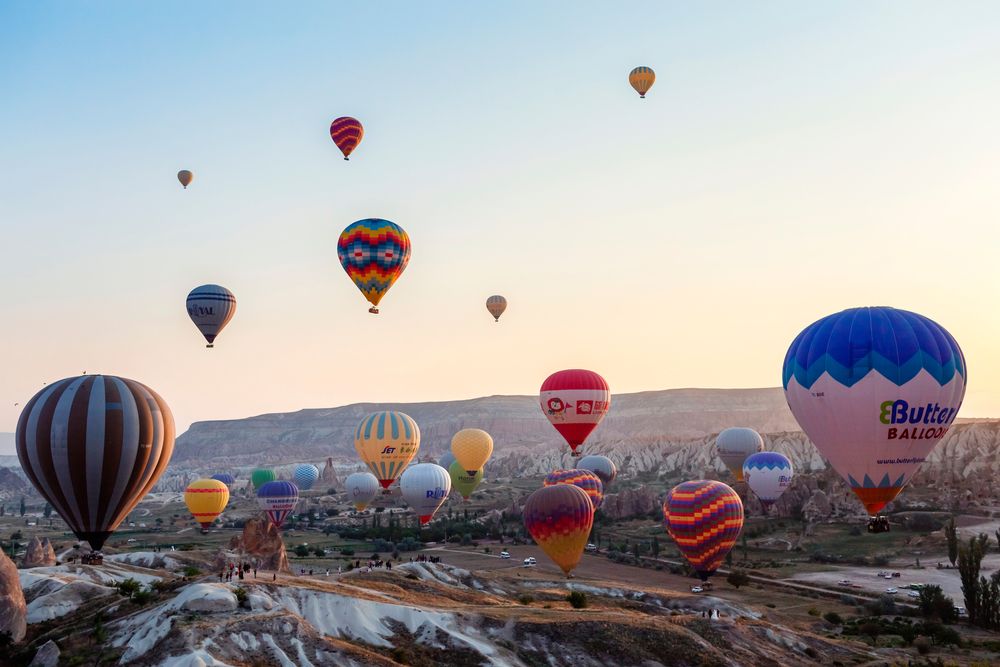 A spectacular show – hundreds of balloons taking off to the sky at the same time
Flying conditions depend on the organizers. Most bring tourists at dawn, when Cappadocia is colored by the gentle orange rays of the sun. There is a detailed briefing beforehand, then you are escorted to the launch pad, where about 200 balloons will take off simultaneously to a height of 300-500 meters. Some companies offer tea and refreshments, organize photo sessions or give certificates at the end of the flight. The only safety conditions are the same – the flights are strictly controlled by the civil aviation of the country, without special permission no pilot will take the balloon into the sky. General recommendations for all tourists – warm clothing, hats, sunglasses, special fixing straps for gadgets and cameras. 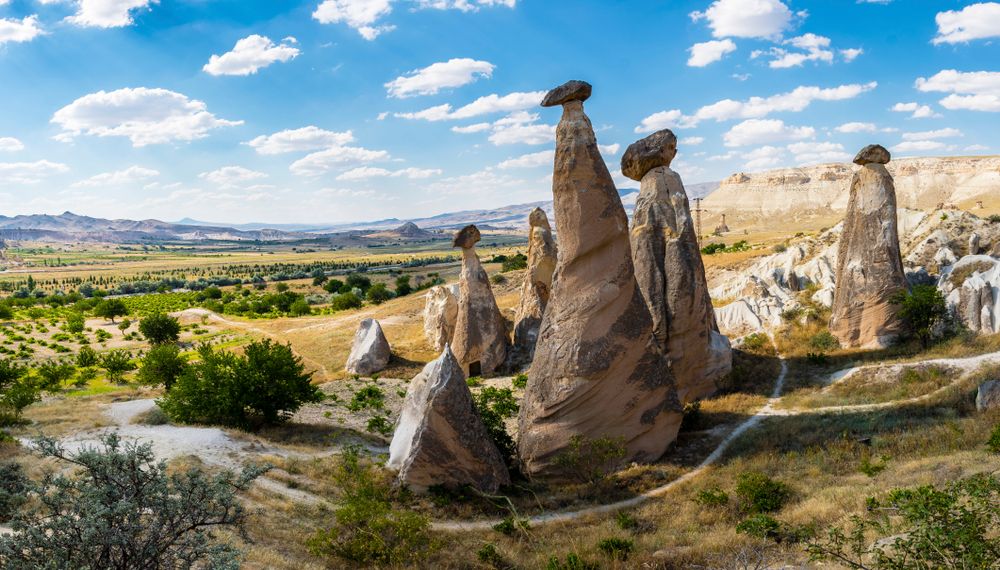 The Alien Landscape of Cappadocia
It is also important to have no fear of heights. But if fear does not allow to go to the basket, you can enjoy the spectacular view and take great pictures from the observation decks! You get the best view from the hill at Aydın Kıraği in Göreme, a walk under the balloons in the Valley of Love is an unforgettable experience. The valley of pigeons is interesting not only because of the far distance, but also because of the numerous tunnels and bird's nests right in the rocks. And bloggers and photographers go to the terrace of Sultan Cave Suites, where, surrounded by colorful pillows and beautifully decorated breakfasts, the most spectacular photos! 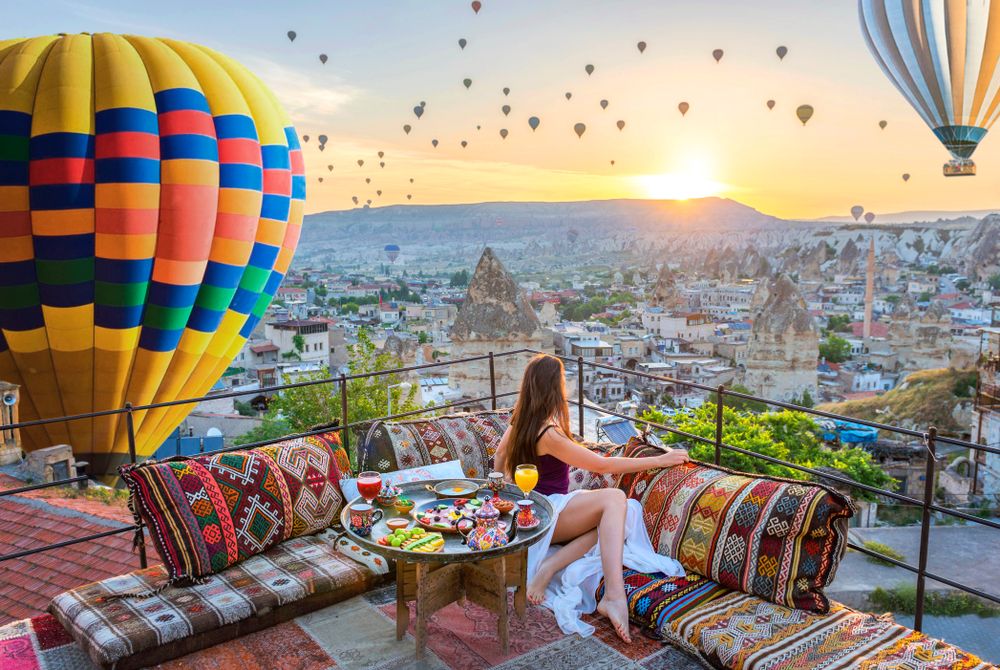 You'd like to have breakfast on the terrace with such a view every morning!