The island of Santorini in Greece

Santorini is a Greek island of volcanic origin, resulting from a massive volcanic explosion that occurred around 1450 B.C.

The last time the extinct volcano, or what is left of it, woke up in 1950. The beautiful architecture and scenery, the clean blue sea, the long black sand beaches, the delicious Mediterranean cuisine and the light wines made from the highest quality local grapes make Santorini an unforgettable vacation destination.

Unforgettable views of the island of Santorini

If you want to see the sunrise and sunset on the terrace overlooking the caldera, you can stay at a hotel on the west side of the island. The hotels are built in traditional style, where the roof of one house becomes the terrace of another one, intertwining one with the other. 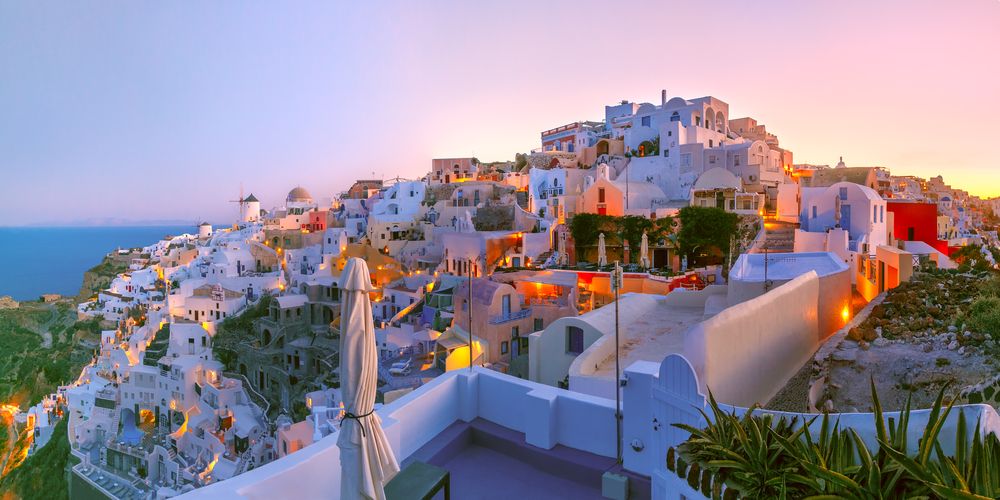 A beautiful sunset on Santorini

However, despite the unusual appearance of these hotels, inside you will find all the necessary facilities for the most comfortable and convenient rest, besides, pleasantly surprised by the level of service provided.

For beach lovers we suggest the eastern part of Santorini to settle in the tourist villages of Kamari or Perissos which feature black sand beaches of volcanic origin. 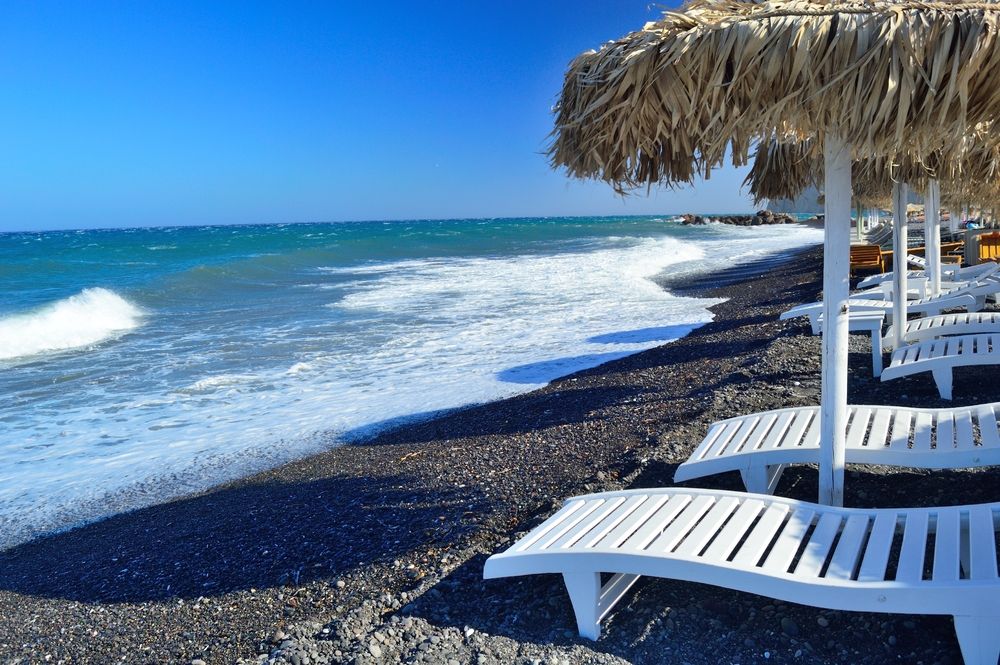 In general, Santorini is an amazing place, where the traditional colors are white and blue. With clear blue skies, warm blue seas, brown volcanic rocks, and bright red geraniums planted everywhere, it’s no wonder that any landscape looks like a colorful postcard. 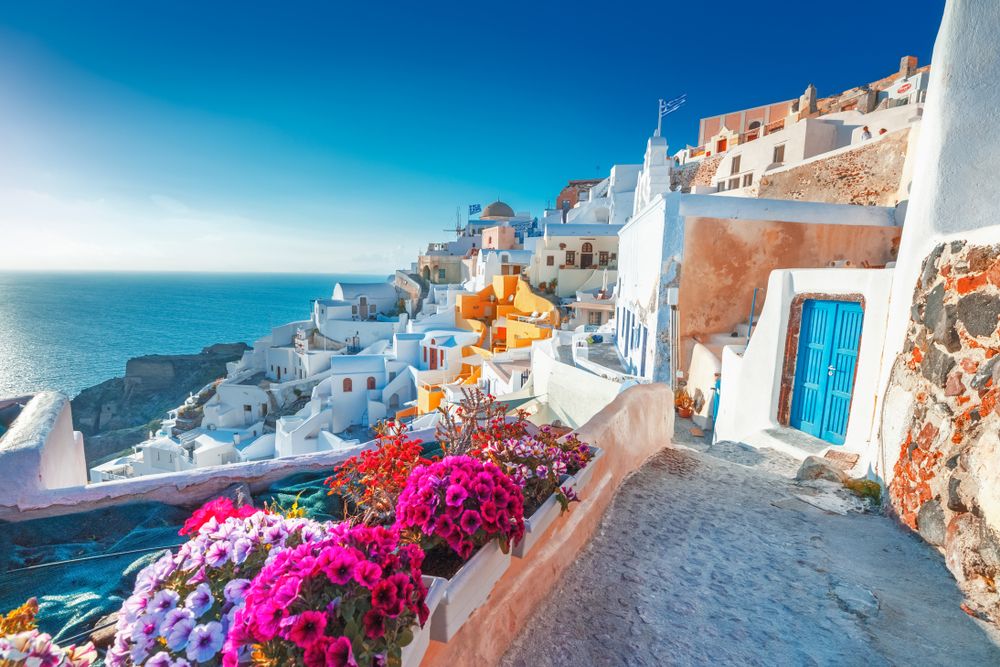 Flowers enhance the beauty of Santorini

While in Santorini, don’t miss a visit to Fira, the capital of the island with its snow-white houses, rich archaeological museum, lots of small souvenir stores. If you prefer to go sightseeing alone you can rent a car or a motorcycle from a travel agent in Fira. 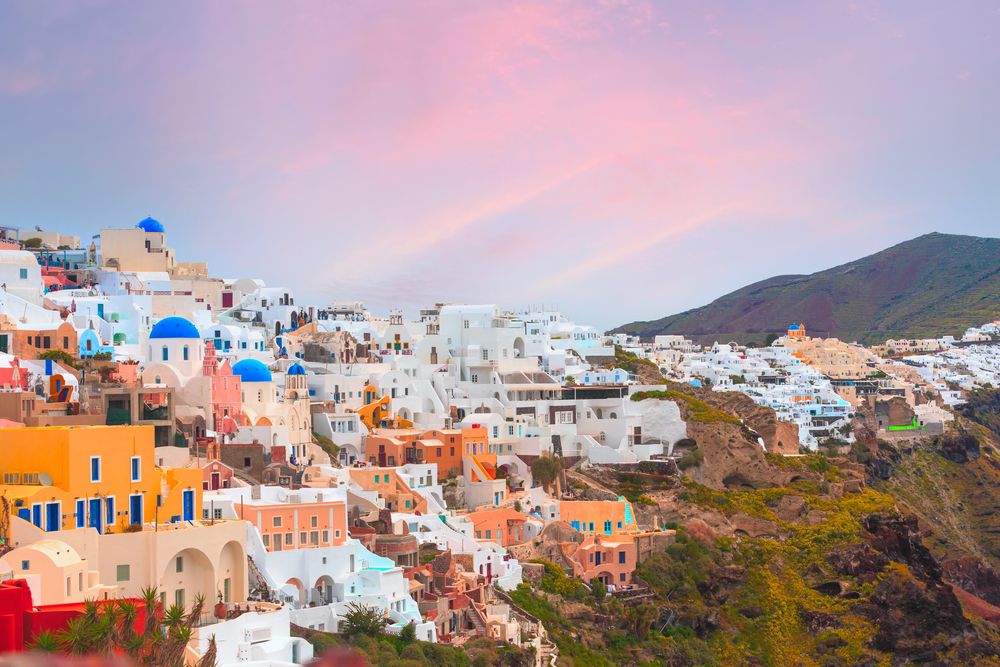 Visit the picturesque town of Ia, just 10 km from Fira. Sunsets are spectacular and draw huge crowds (not to mention the fact that you can wander endlessly through the city’s intricate narrow streets with an endless number of steps and white and blue churches). 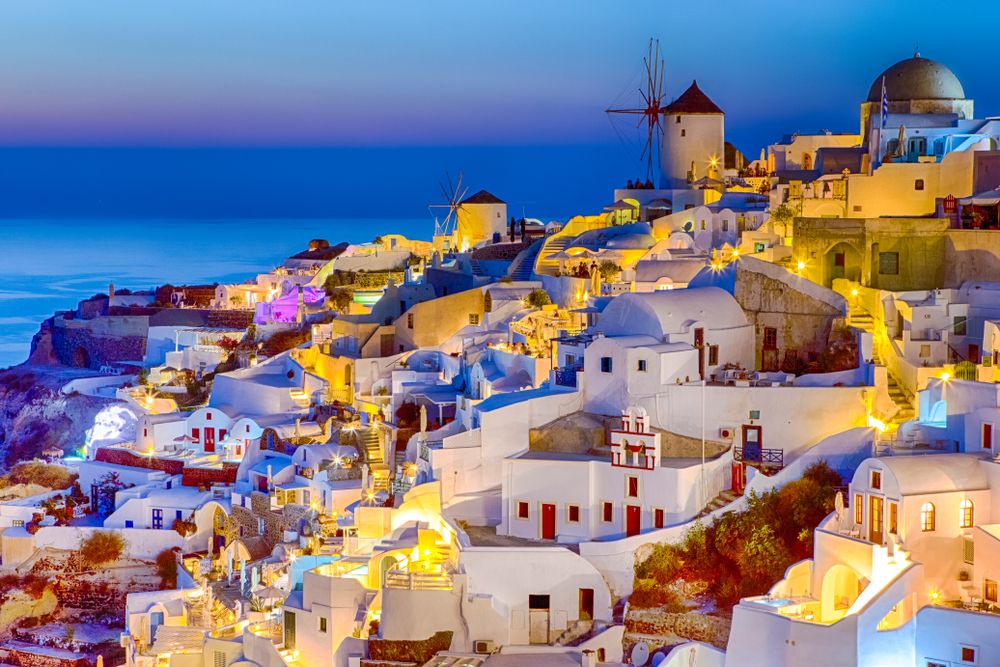 Iya is equally beautiful at any time of day

The other islands that you can’t miss are the volcanic Nea Kameni and Palea Kameni. On them and today are the craters of the volcano. Be sure to bring very comfortable shoes and a bottle of water, not forgetting clothing with as long sleeves as possible, which will save you from the scorching sun. The ascent to the top takes about an hour, so be patient and strong if you want to visit the volcano. 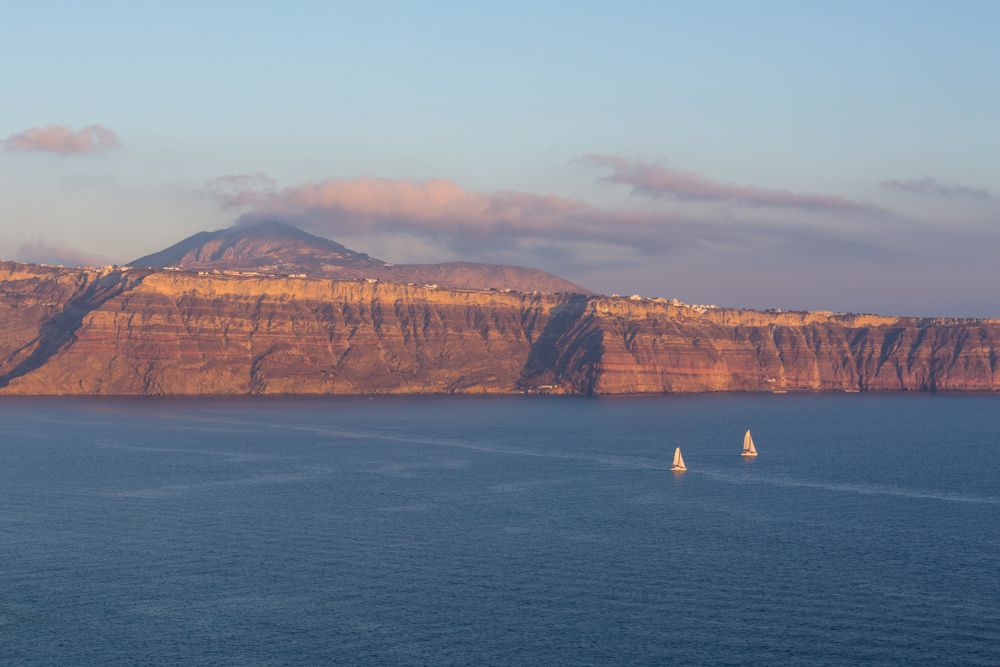 The volcanic island of Palea Kameni

I must say that there is no vegetation at all, while around reigns frozen lava and a very peculiar smell of sulfur, while the ground in many places is still warm. The volcano is active, last time it was active was about 50 years ago, but it has never caused serious damage. Scientists are constantly monitoring its activity, so they can predict the eruption in advance.

Finally, in an unforgettable journey of an hour and a half from Santorin lies the legendary island of Ios, where every summer youths from all over the world head in order to party at the local clubs, nightclubs, and evenings until dawn.

Party on the island of Ios

But if you stay away from the main island village (in fact, there are no cities here), you will not hear the noise of the youth having fun till the morning. And then the island will appear in a completely different light – a quiet and pastoral corner of Greece with its ancient history. There is a museum of local history and archaeology, where there is a stone tablet with a calendar engraved on it. The inscription on the sign says that in the month of Homerion there will be a sacrifice. Since the month with such an unusual name simply did not exist, according to historians, this is serious enough evidence that the famous poet Homer was buried on the island of Ios (we must say that for the honorary right to be called the last resting place of Homer on earth fought about seven Greek islands). After all, Herodotus himself wrote that Homer’s ashes found rest in the place where his mother was born, namely on the island of Ios.

The ruins of Homer’s tomb