The sights of Crete are diverse and many are known all over the world. Just think of the Minotaur Monster, who lived on the island, prowling through the countless corridors of the legendary labyrinth. The remains of the labyrinth remain to this day and are viewed with interest by tourists.

The history of Crete can be traced back to mythological times and is closely connected with the legends of the Olympic gods and the ancient Greek heroes. Many evidences from that era can still be found on the island today.
There are also many medieval monasteries, fortresses and towns on the island. Besides the fortress, Crete is full of beautiful places – caves, groves, bays, mountains, plains, rivers and lakes.

A small island with an impregnable fortress. From its walls you can admire the beautiful bay. The building was built to protect Crete from invaders and it succeeded for a long time, until the Turks conquered Crete. It is where the Christians, who didn't want to convert to Islam, fled afterwards.

The people of Crete often like to tell that the island is haunted by ghosts – the souls of warriors who died during the long history of Spinalonga. Currently, the island is a popular tourist destination, and there are cafes and souvenir stores near the fortress. A boat trip from Agios Nikolaos or Elounda takes you to the island. The tour includes lunch in a pub and a visit to the beach on the island of Kolokita.

The monastery is near the village of Kera, in the high mountains at an altitude of 622 meters, built in the 13th century. Inside the working Orthodox church, which owns the famous icon of the Virgin of Kardiossa. The icon was painted in the 7th century by St. Lazarus. There is a popular belief that the icon helped childless women and cured illnesses. The abbess and a few nuns now live in the monastery, although it has room for 25 people. There is beautiful nature around the structure, peace and quiet.

A huge valley, surrounded by hills and mountains, lies on the east side of the island, 25 km from Malia. There are many villages here, whose inhabitants are mainly engaged in cattle breeding and farming. This area of Crete is considered the richest and most fertile, with clean air and a mild climate. 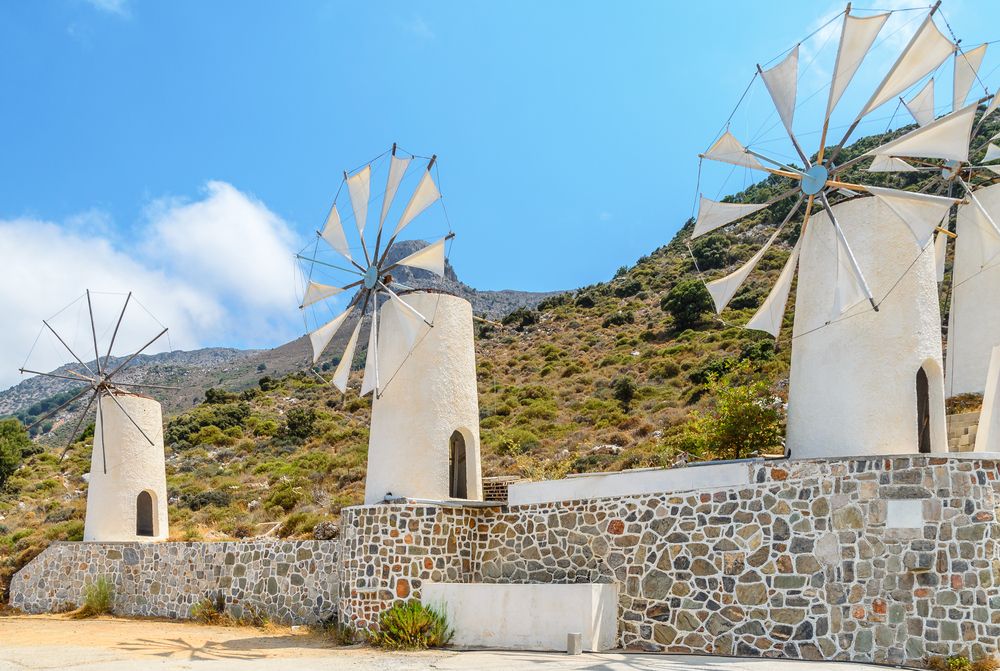 The Lassithi Plateau is a scenic attraction of Crete

One of the attractions of Lassithi plateau are the windmills, their number exceeding 10 thousand. There is a constant breeze on the plateau, and the blades of the mills spinning all the time.

Mount Dikti, the cave of Zeus.

The most famous and most visited place is mountain Dikti, near the village of Psihro. In this mountain is the cave where Zeus is said to have been born. You can reach the inconspicuous entrance by a narrow winding path. Climbing up it is not difficult, but still desirable to wear comfortable shoes and take into account that you do not walk along the promenade, and climb to a height of more than one thousand meters.

Inside the cave are huge, human-sized stalactites, and at the bottom is a lake. Tourists like to throw coins at it, so that you can come back again. In this lake, archaeologists have found ancient weapons, gold jewelry and other objects of the Minoan era. It is forbidden to take photos in the cave, but you can get permission after talking to the attendant, as long as you do not use flash. Wandering through the passages, you'll touch the legendary tales from the prehistoric era.

The palace of Knossos.

The most important and most famous attraction of Crete. The palace is believed to have been built by King Minos four thousand years ago. And the famous Daedalus, whose son Icarus unsuccessfully tried to fly away from the island with his wings, had a hand in its construction.
The ruins of the fortress were discovered in 1878, but the excavations began only in 1900. When archeologists returned the structure to the light, they found out that the huge building had three stories, many basements, cellars, dungeons, and storerooms. On the top were the king's chambers, the throne room and the treasury. The Minoan civilization knew about the sewage system and the palace was equipped with a lot of pipes which supplied water to the toilets and pools.
The architecture of the building even now impresses with its splendor – wide staircases, red and black columns, frescoes depicting young men engaged in sports, ritual girls jumping over a bull. Everything is beautifully and clearly executed, you can not even believe that the drawings a few thousand years ago. 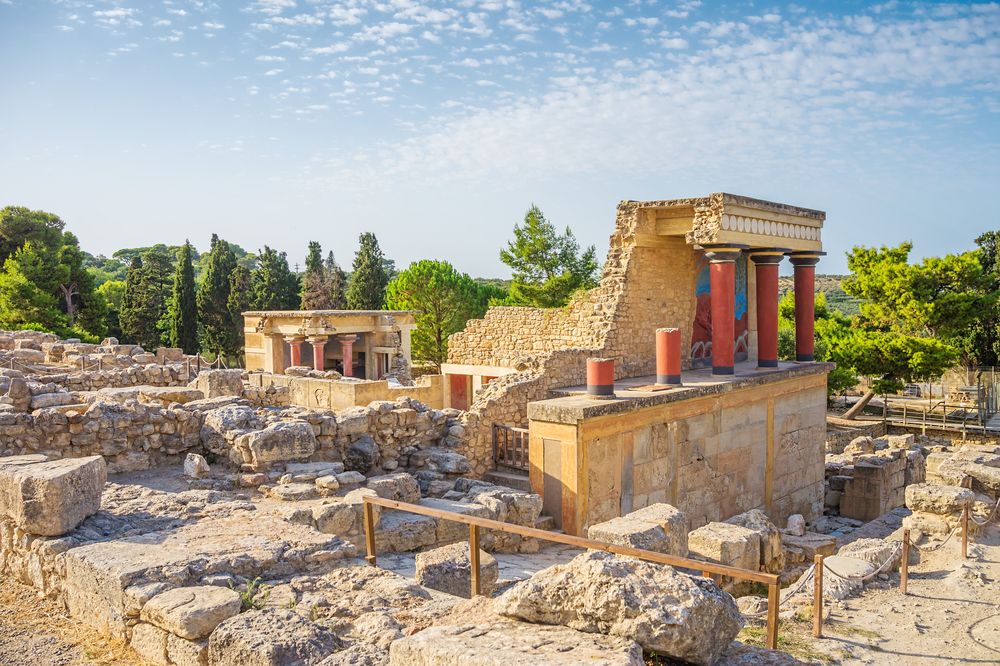 Knossos Palace is located 4 km from the sea, quite close to the capital of Crete, Heraklion. It can be reached by bus or by car. Nearby there is a free parking lot, and the way will be shown by signposts. The entrance fee is 6 Euros. The place is popular and there are a lot of tourists around the ruins, so you can get confused and not immediately find where to start looking around. It is indicated by a sign with the inscription "KNOSSOS ENTRANS. EINGANG. PALAST. PALACE. PFLFIS.".
The myth of Minotaur and Theseus made the palace famous. To this day, many scholars are convinced that the palace of Knossos is the very palace that houses the labyrinth designed by Daedalus on the orders of King Minos. This is evidenced by the strange and confusing architecture of the palace, which contains several levels, some of which go deep under the ground. Many corridors go in unknown directions, abruptly and unexpectedly ending in dead ends. The building's passageways seem chaotic, resembling an intricate web. The version about the Minotaur and the labyrinth is confirmed by the images of a bull.
However, there is another version. In the palace, many images of a double-edged axe, called a labris, are painted on the frescoes. Hence the hypothesis of the labyrinth. 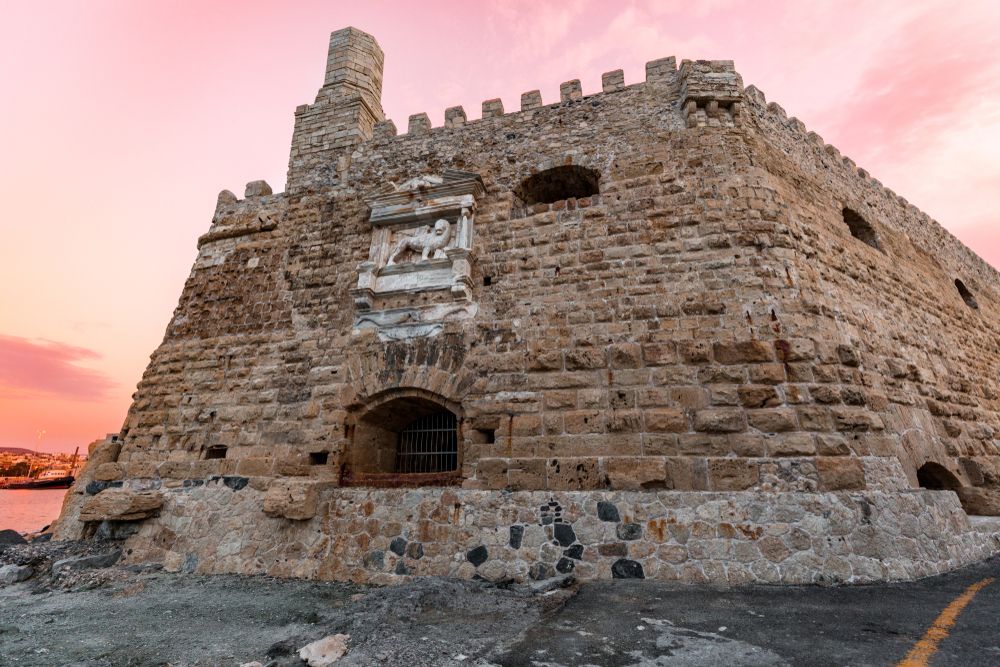 The Venetian fortress of Koules, in the center of the capital of Crete

The most beautiful fortification of the Venetian period. The fortress is built in Heraklion and was used in ancient times as a harbor entrance. The bastion is made of big stone blocks resting right on the rock. The fortification has an impregnable, majestic appearance. Inside there used to be many rooms for accommodation, weapons, water and food. The name of the fortress was given by the Turks. It is now popular with tourists who love to listen to the echo of footsteps inside its stone rooms and with yachtsmen who admire it during their boat trips.

The monastery is known for its long, often tragic history. It contains a unique relic, the miraculous Ephraim of Prevelius cross. The monastery was built four centuries ago. Situated in a quiet and remote area, but easy to reach – just drive 35 km from Rethymno by an inter-district road that gradually ascends the mountains. The road goes through a gorge and the path eventually becomes narrow and winding, but the local nature is very beautiful, especially the view of the sea. 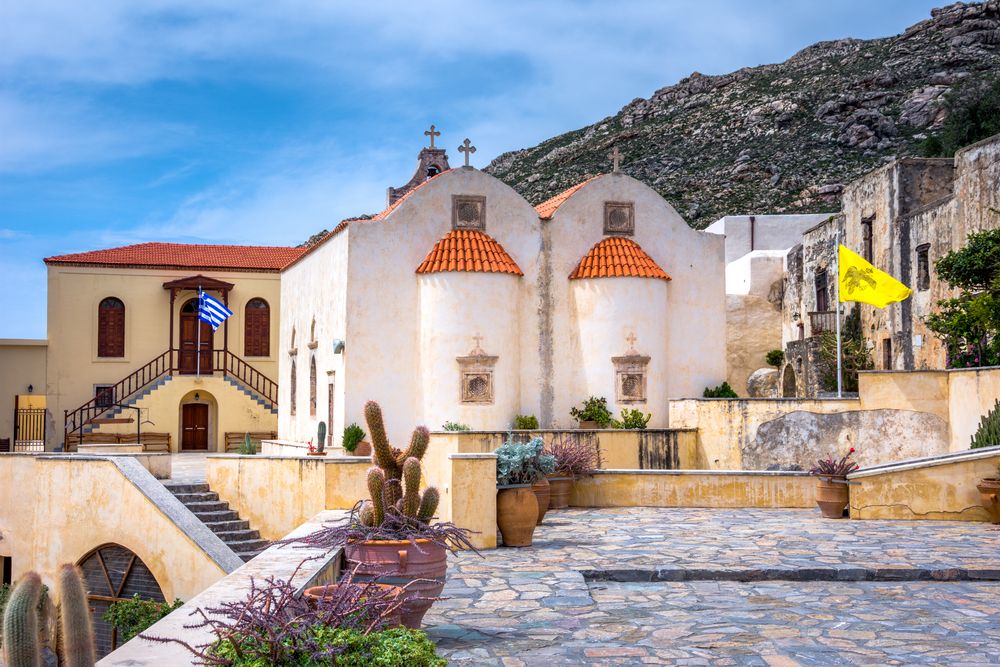 Nowadays the monastery is called St. John the Theologian, and inside its walls there is a museum, a souvenir store, a fountain, a small zoo and a monument dedicated to the Battle of Crete.

The castle is located in Rethymno, in its northwestern part on the top of the hill Paleokastro. It was built by the Venetians in the 16th century, but even now you can see just how strong the fortification was. The building has a pentagonal shape and is the largest such fortification erected by the Venetians on the island. Nowadays the fortress hosts a theater, which every year hosts the famous festival of Rethymno. Renaissance classics are staged on the stage, and the audience can not only enjoy wonderful performances but also feel the spirit of the Middle Ages and Renaissance within the walls of the building.

The city of Aptera. 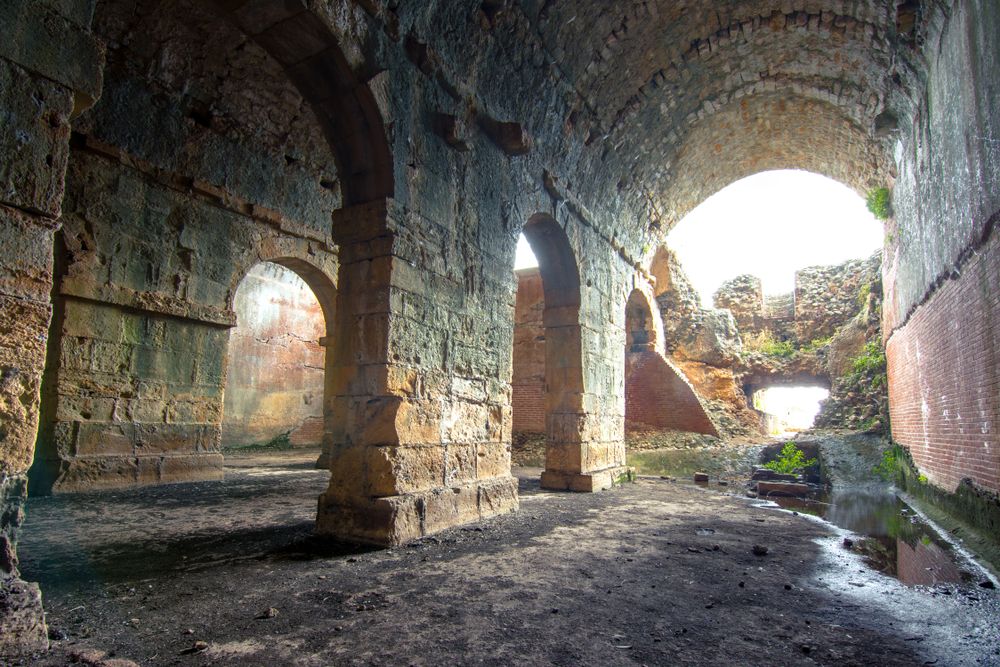 The ruins of the "wingless" city Apthera

The ancient city, which originated in the mythical era of the island. It is located in western Crete between Chania and Rethymno. Legend has it that the city got its name from a musical dispute between sirens and muses. The Muses won and the loser sirens had to drop their plumage and couldn't fly away. Hence the name Aptera, which means "wingless.". Even now it is noticeable that the city was rich and prosperous – the remains of the high wall, stretching, as scientists assume, for 4 kilometers, the ruins of the magnificent temples, amphitheaters, columns, many statues, vessels, coins and jewelry, all this shows the magnificence and power of Apter. Many of the locals even now find gold objects in the ancient city.

Now a park with rare fauna and flora, the total number of species is about 450. Taking out of the gorge plants is forbidden, only photography is allowed.

You can walk the gorge in 6-8 hours, so it is better to be prepared for the walk in advance and pick comfortable shoes. But for those who don't want to spend so much time there is a shorter route, starting near Agia Roumeli and ending in Sideroportes. The price for a visit to Samaria Gorge is 5-7 euros.

Gortyna is currently a major archaeological site, and among the ruins of Gortyna scholars have found the most objects of that time.
The most stunning inscription is considered to be in Doric, the Gortyna code of laws. It is the oldest code of law in Europe, more than 2,500 years old. 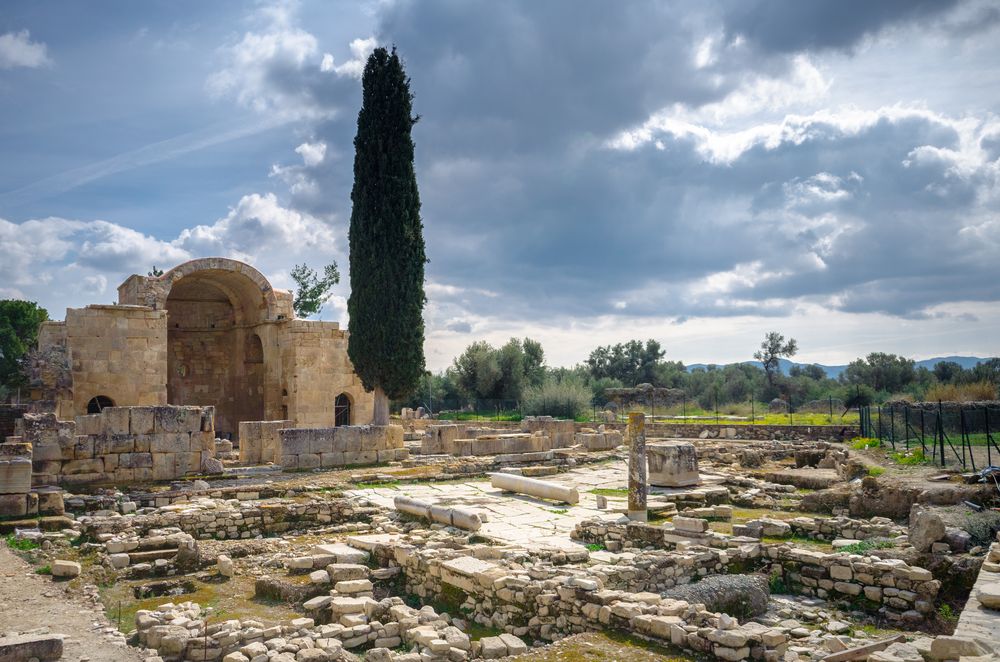 The ruins of the first Christian church on Crete

No less interesting is the Basilica of St. Titus, the first Christian church on the island, which is 1200 years old; the odion, the temples of Apollo of Pythias, Isis and Serapis.
The territory is very large and not all parts of it are tourist-friendly, but what you can see makes a great impression and gives a chance to touch the early history of our civilization. 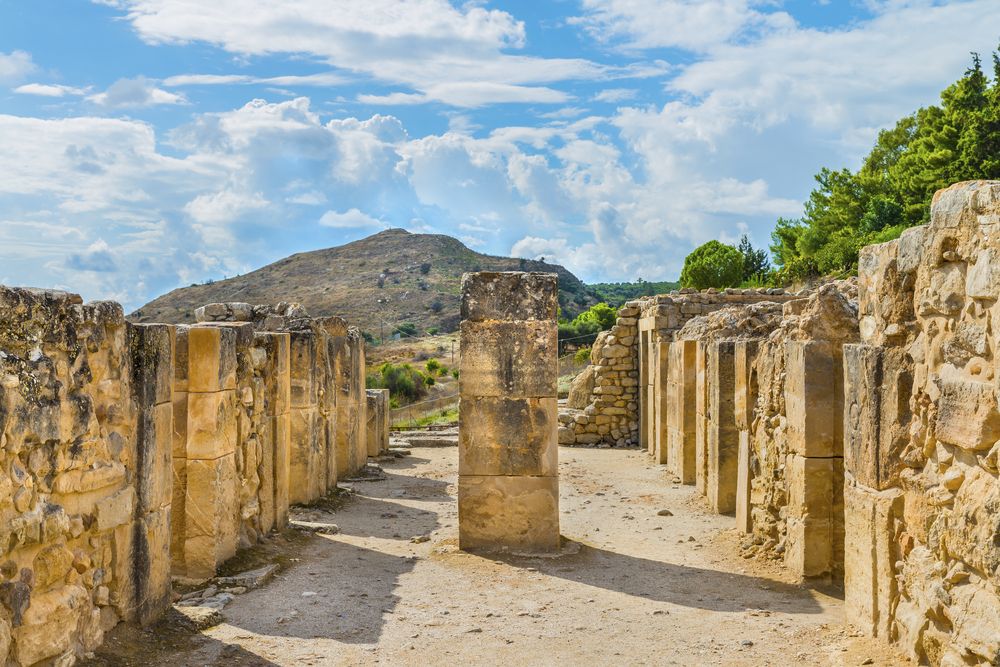 The ruins of the palace of Phaistos

The palace at the ancient city of Phaestos on the Messara Plain. It used to be the most important city of Crete, but after the earthquake it lost its place to Gortyna.
The palace of Phaistos is not as popular as the palace of Knossos, which is steeped in legend and has been partially restored. But there is so much to see. At the moment tourists can see the enormous ruins spread over 8000 square meters, which consist of several floors, many rooms, stairs and columns, that are still intact. The royal chambers are quite curious, you can't go inside, but standing in the distance, you can see the amazing tiles on the floor, and the remains of the beautiful paintings. 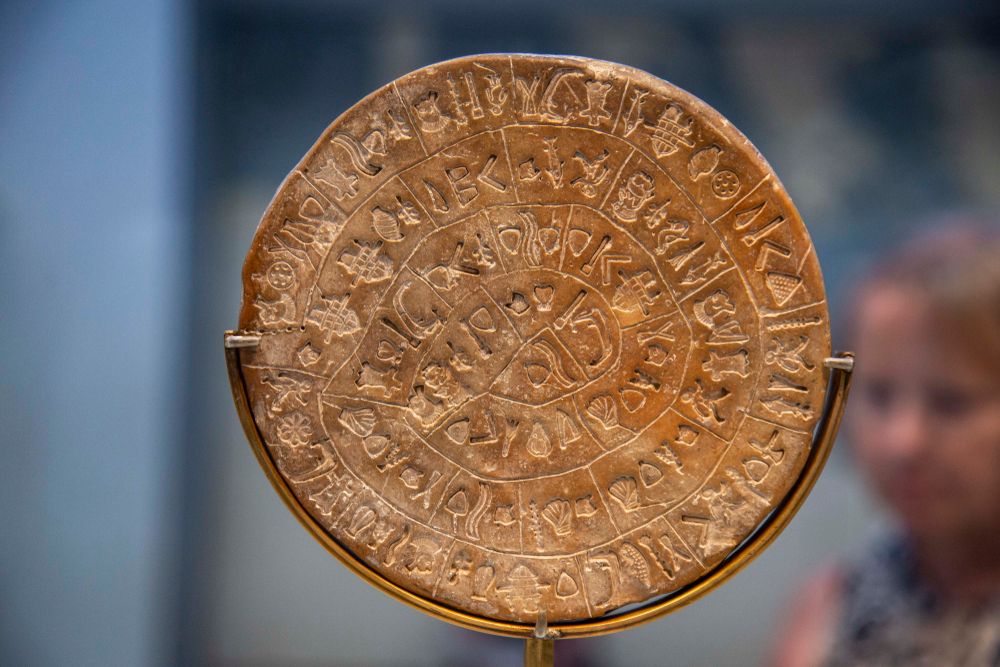 The most significant find in the city is the Phaistos disc, a coin with a hieroglyphic inscription twisted into a spiral. The legendary Gortyna is over 3700 years old and is a worthy alternative to the axe of Knossos when choosing a souvenir from Crete. The coin is now housed in the Archaeological Museum in Heraklion.

Besides the listed sights, there are a lot of others, no less interesting and curious. A forest of Vai palms, museums, beautiful bays, bays, forests, meadows, plateaus, etc.

Crete is the cradle of European culture and every educated person knows the myths about Zeus, Daedalus and Icarus, Theseus, Minotaur and Ariadne. A trip to Crete is an opportunity to see the places of myths and legends with your own eyes and feel the ancient times and the spirit of history. Besides the cultural program you can have a rest in Crete, swim in the clear blue sea, enjoy the local cuisine and return home with lots of good memories.