Kemer attractions for children and adults

Kemer is a province of Antalya, the resort capital of Turkey. Tourists love Kemer for the mild sun and warm sea. It lies in the foothills of the mountains and is surrounded by many beaches and picturesque coves. In terms of architecture, Kemer has no important historical structures and buildings, but the city is full of various fascinating places and natural attractions.

If you want to go on a boat trip go to Kemer port. This is where the yachts, boats and ships are anchored. You can admire the views of the coastal coves while boating. Fishing enthusiasts can fish in the sea. There are restaurants in the harbor itself which serve fish from the local fishermen.
Location: Kemer coast. 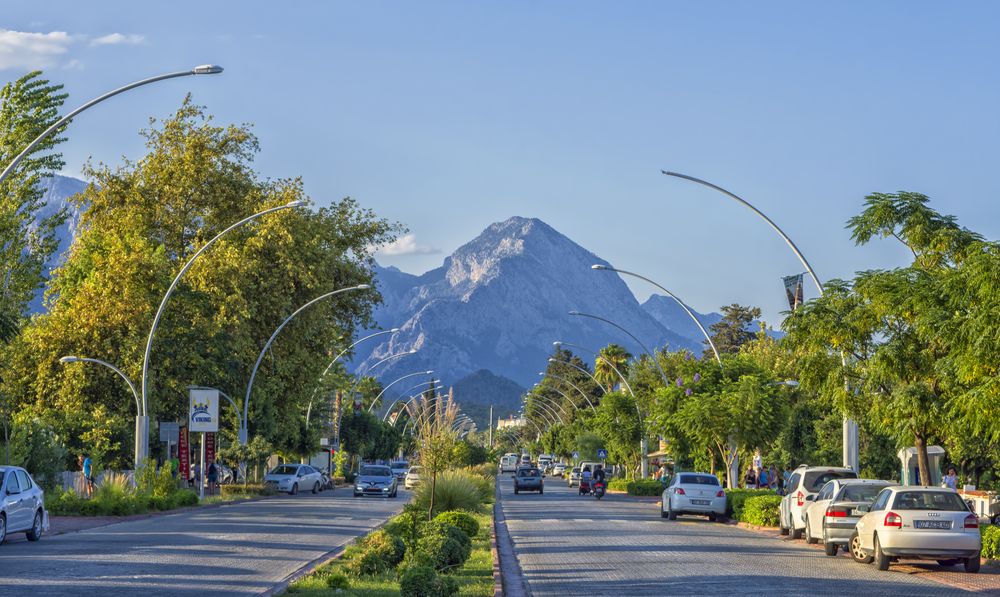 Want to get into the spirit of the city?? Take a walk down the boulevard avenue with market stalls, small stores and restaurants. There are always many tourists and visitors to Kemer. Along the boulevard are five-star hotels. Bright lights illuminate the boulevard in the evening, giving it a special attraction.
Location: Ataturk Blvd, Kemer. 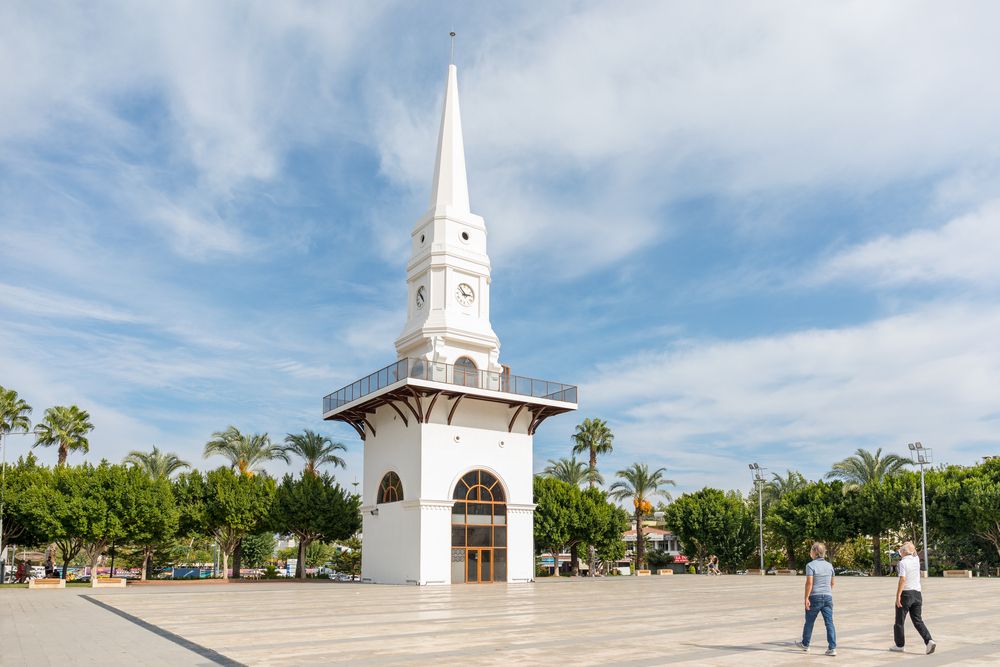 The central attraction of Kemer is the snow-white clock tower

On the Ataturk Square is the main symbol of Kemer – the clock tower. The white stone of which the tower is made is what gives it its picturesque appearance. There are fountains next to the tower which are used to take beautiful pictures. Near the tower once a week gathers Oriental Bazaar. Here you can buy spices, exotic fruits and vegetables as well as spices.
Location: Ataturk Square, Kemer. 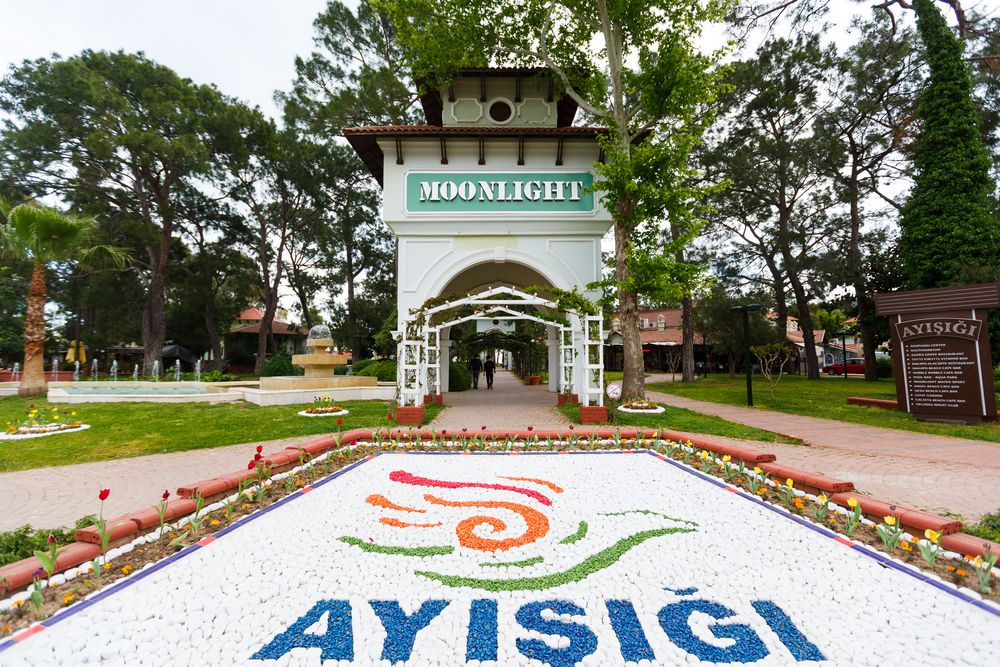 Beautiful park with a sandy beach

This is a great place for both active holidays in Kemer and leisure time on the beach. Dolphinarium, concert stages, summer cafes, clubs and stores – all this can be visited in the "Moonlight. Also inside the park is a sunny beach where you can sunbathe and swim in the sea. There are playgrounds and fun rides for kids.
Location: Merkez Mahallesi, Kemer.
Working hours: 24 hours. 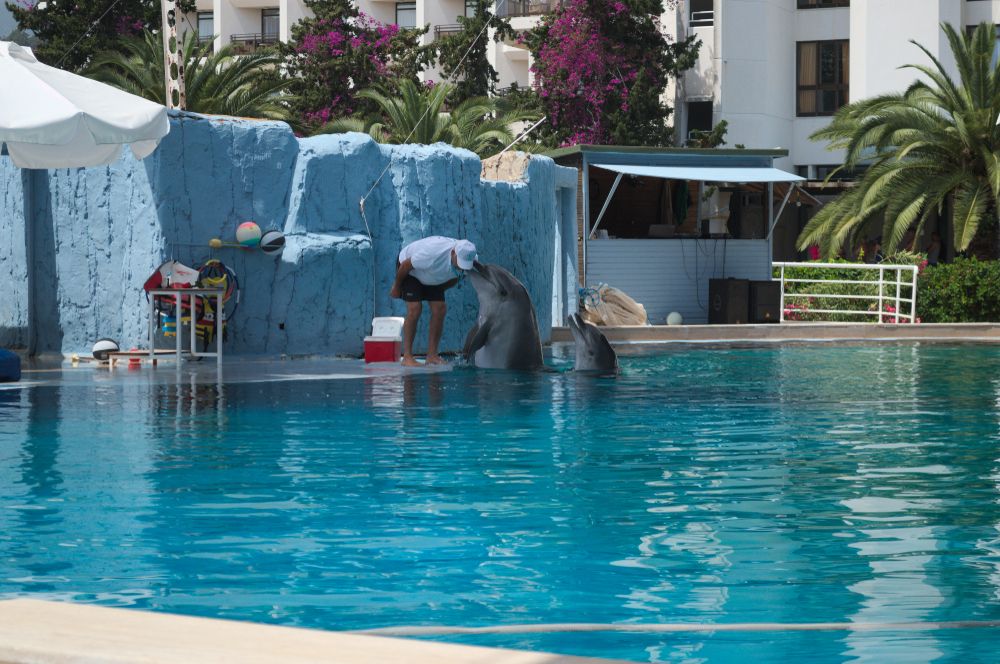 Dolphinarium in the park Moonlight

It is a popular destination for tourists with children. Dolphin show at Moonlight Park. Dolphins and sea lion perform in front of the audience. The animals do different interesting tricks. There is a paid opportunity for tourists to swim with dolphins. You can also take pictures with the sea "artists" of the show.
Location: Moonlight, Kemer.
Opening hours: from 10 a.m. to 5 p.m.

The Yoruki are an ancient nomadic tribe that lived on the territory of Turkey in the 14th century. Nowadays, Turks call Yoruk active and business people. In the Ethnopark, tourists can see an illustration of the life of this tribe. Here you can taste traditional Yoruk cuisine and see the work of artisans. This place is often included in sightseeing tours. In the ethno park you can make memorable photos with Yoruk figures.
Location: near Kemer.
Opening hours: 9 am to 6 pm. 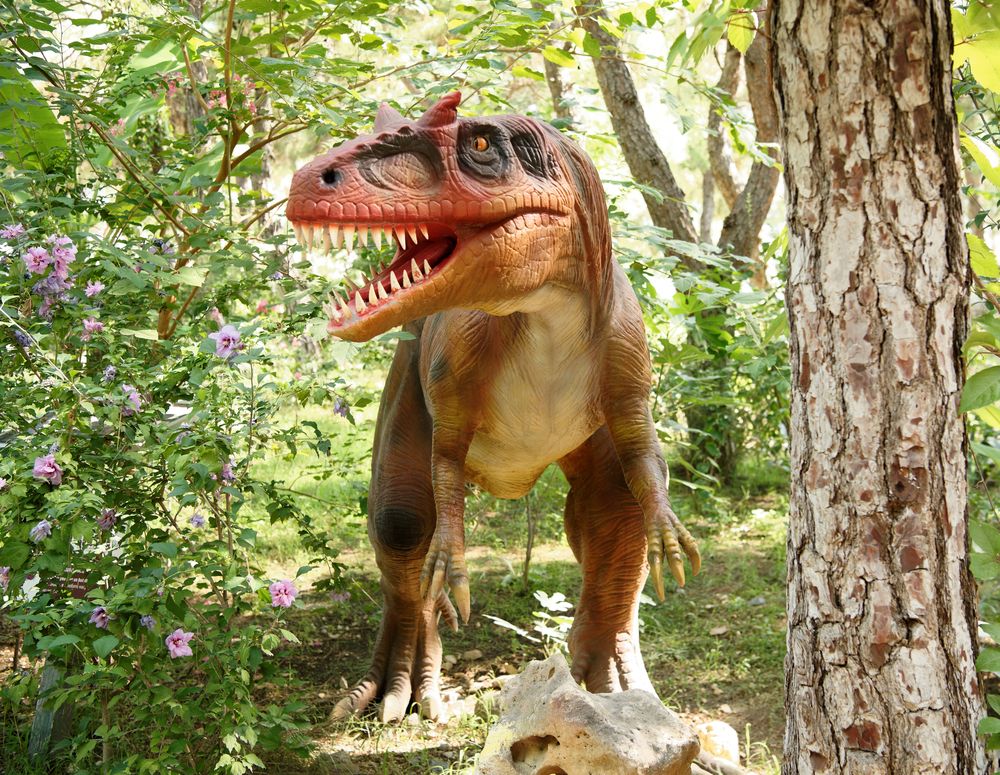 In the village of Geynyuk is an interesting amusement park Dinopark. If you are traveling with children, then be sure to visit this place. Young tourists enjoy riding dinosaurs, take part in fun contests and get prizes. There are also fascinating shows that will be of interest even to adults.
Location: n. Geynyuk.
Open from 9 a.m. to 7 p.m. 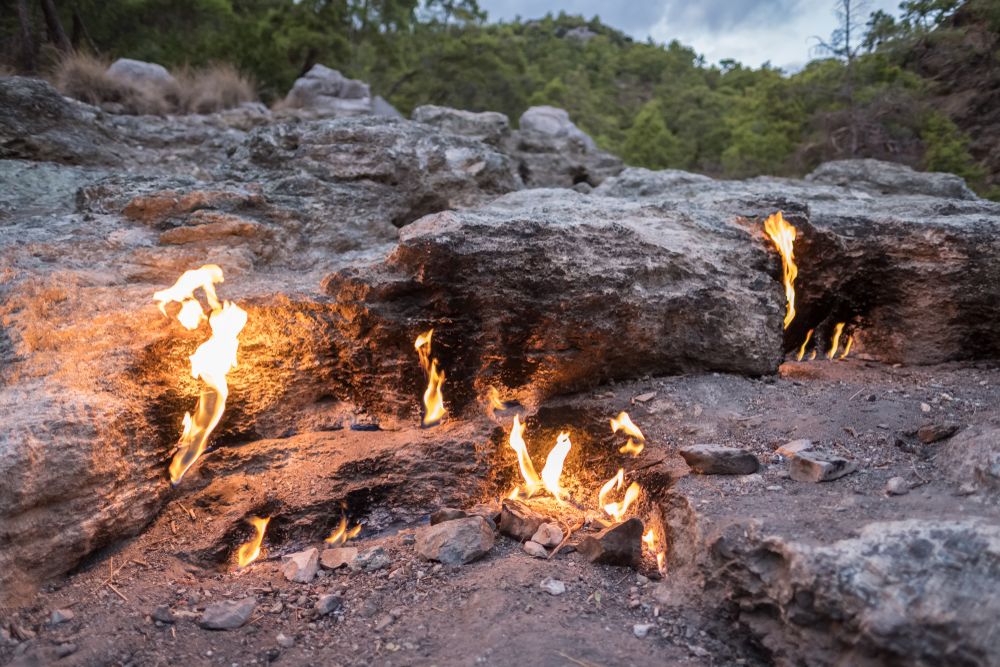 According to legend, inside the Yanartash mountain there is a fire-breathing monster with a lion's head, which was defeated by mythical hero Bellerophonte. Fiery Mountain is an interesting natural phenomenon. On its slopes the flames regularly flare up because of the gases that come to the surface from the depths of the mountain.
Location: near Olympos, Kemer. 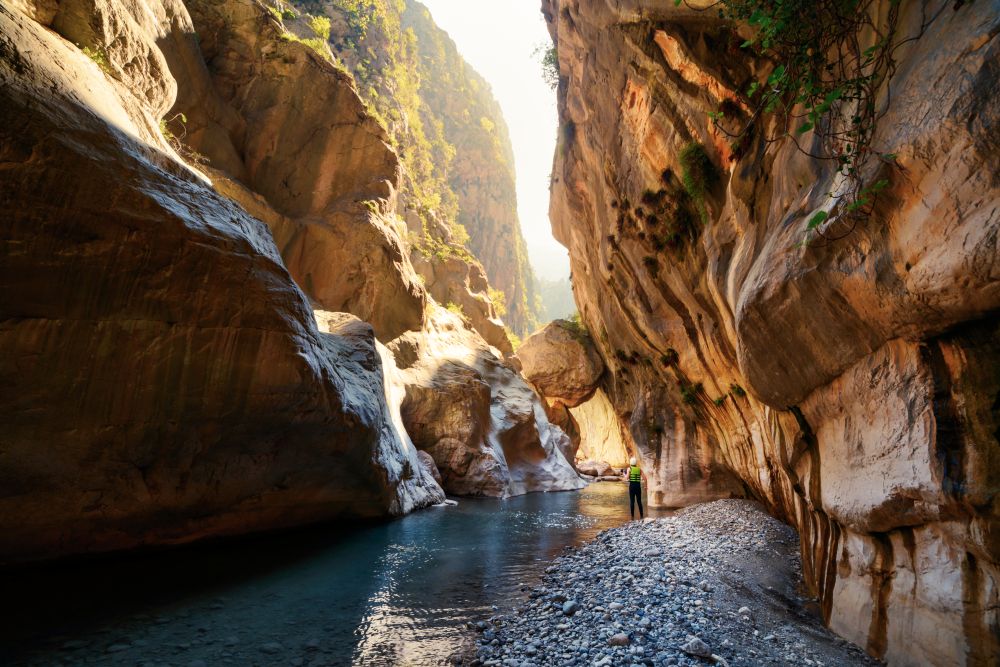 If you want to enjoy hiking along the scenic area, you should go to Geynyuk Canyon. It's a beautiful place, perfect for active holidays in Kemer. Tourists are provided with life jackets, wetsuits and special shoes to pass the route. Wet suits are needed because some parts of the route go through the water.
Location: n. Heynyuk, 9 km from Kemer.

Cape and the Helidoniye Lighthouse 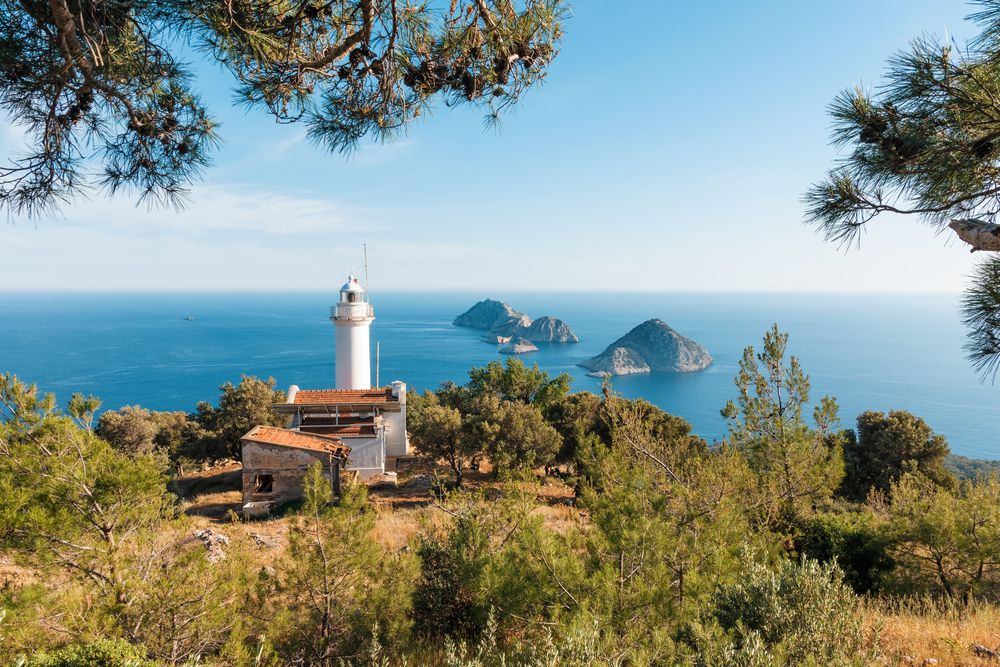 Not far from Kemer is this place. The nature of the cape is fantastically beautiful, with a view of the Mediterranean Sea. In 1936, a 9-meter-high lighthouse was built there. For 80 years, the same family has been taking care of it, handing down its work from generation to generation. The coastline is rocky and covered with groves of pine trees.
Location: Cape Gelidonia, Kemer.