What to see in Rostov Veliky

Approaching beautiful Rostov, you expect with a great sense of delight something special from this city. No matter what time of year it is. Rostov is equally beautiful in all seasons – in tender greens of the awakening spring and under the tent of magnificent summer foliage, in rustle and spicy smell of a magnificent carpet of crumbling leaves and in shine and whiteness of a snow cover.

Every resident and guest of the city admires the multitude of temples and their extraordinarily golden domes that sparkle in the sun, the monumentality of its buildings, and the warmth of its people. It makes its guests fall in love with it, it allows them to spend time thinking about themselves and about how to make the city pay attention to itself, how to become closer to it, how to make it their own.

A bird’s-eye view of Rostov Veliky

Every year in our country, and abroad, there are fewer and fewer people who would not have heard of Rostov the Great. The city was first mentioned in the ‘Tale of Bygone Years’ in 862. Since old times it was called Rostov Veliky in chronicles. Rostov is an exceptional phenomenon among them: on the low shore of the lake, appearing as if growing out of the water, you can see a city, unusual, fairy-tale like, whose reality is not immediately perceived.

Rostov land is very rich in historical events and facts. Until now, this great city still remembers them. The history of the city is rich and eventful. It has lost many valuables of our culture but it has many things to its credit: these are ancient architectural ensembles, picturesque frescos of temples, a set of rare bells, melodies of bell-ringing, products of folk crafts and trades.

Rostov land greets visitors with unique panorama of temples and monasteries. Among them is one of the most ancient Abrahamic monastery, founded at the end of XI century, Spaso-Yakovlevsky monastery, where nowadays the spiritual school and the residence of Archbishop of Yaroslavl and Rostov Cyril are located. Spread out on the shore of Lake Nero, the monastery and temples impress with their elegance and unusual harmony. Every year a large number of pilgrims visit Rostov the Great. At Spaso-Yakovlevsky Monastery a Pilgrim Center was created. 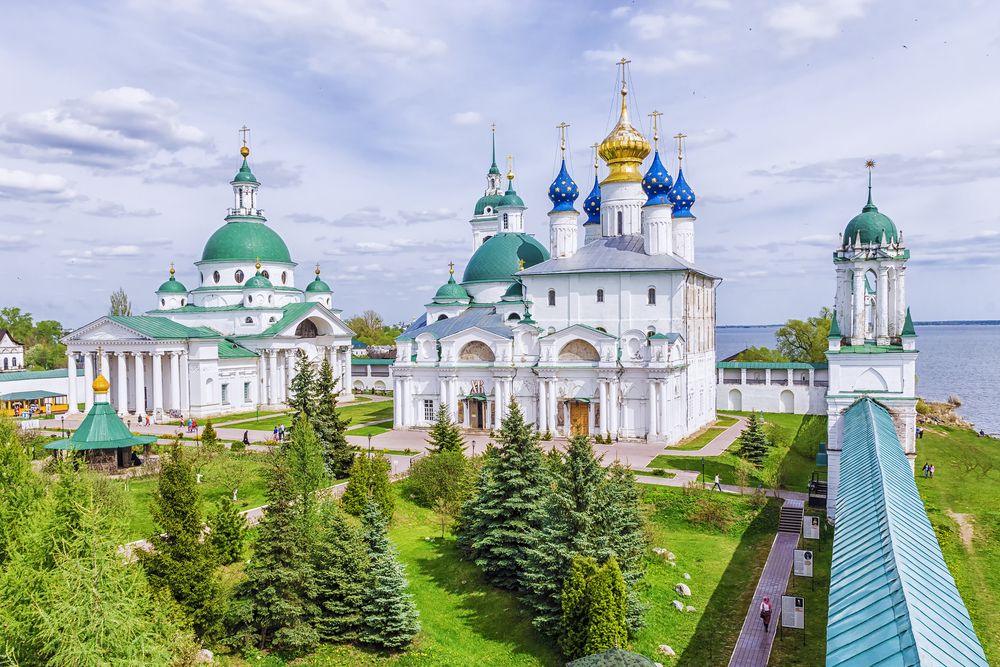 The famous Rostov Kremlin – the city visiting card. The grandiose Kremlin is a sort of monument city in a residential city. Much more could be said about this majestic construction, it is much better to see it with your own eyes. Not far from the Kremlin you can see the Assumption Cathedral, which astonishes with its harmonic proportions. 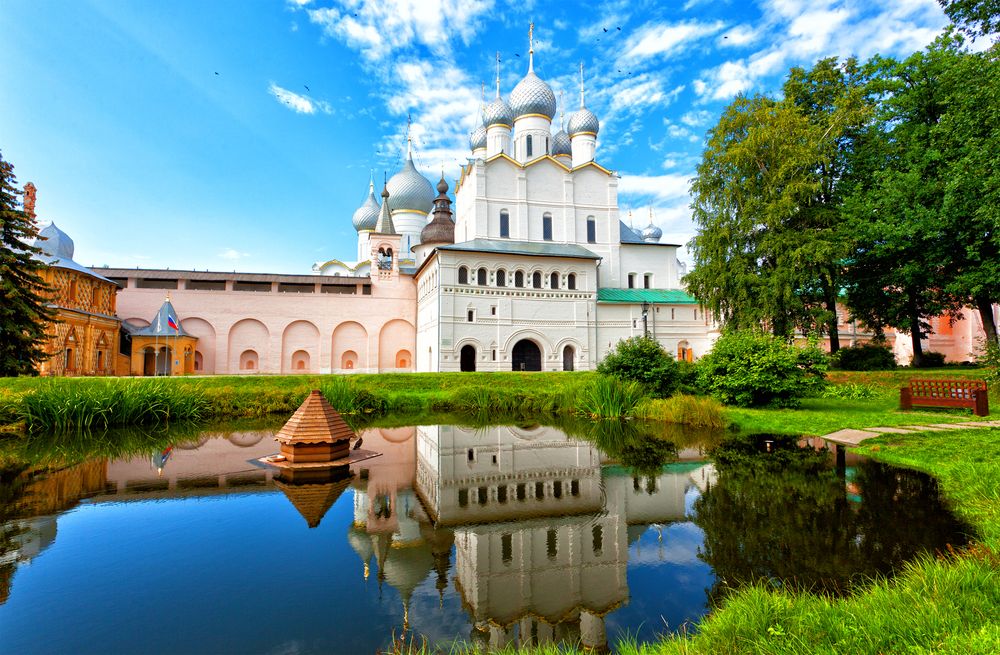 A picturesque view of the Rostov Kremlin

One of the most beautiful buildings on the territory of Assumption Cathedral is a bell tower. To the whole Russia known classic Rostov ringing. On the Rostov Kremlin bell-tower a set of fifteen bells is completely preserved. The pride of the bell tower is the biggest bell, Sysoy, which weighs 2,000 poods (or 32 tons).

Rostov is also famous for its arts and crafts. Rostov land is rich with talented people. Currently the city is implementing a big cultural and historical center project – ‘City of craftsmen’ with the purpose to preserve, revive and develop traditional local crafts and trades, which embody the artistic culture of the ancient city and the individual talent of the talented Rostov citizens. 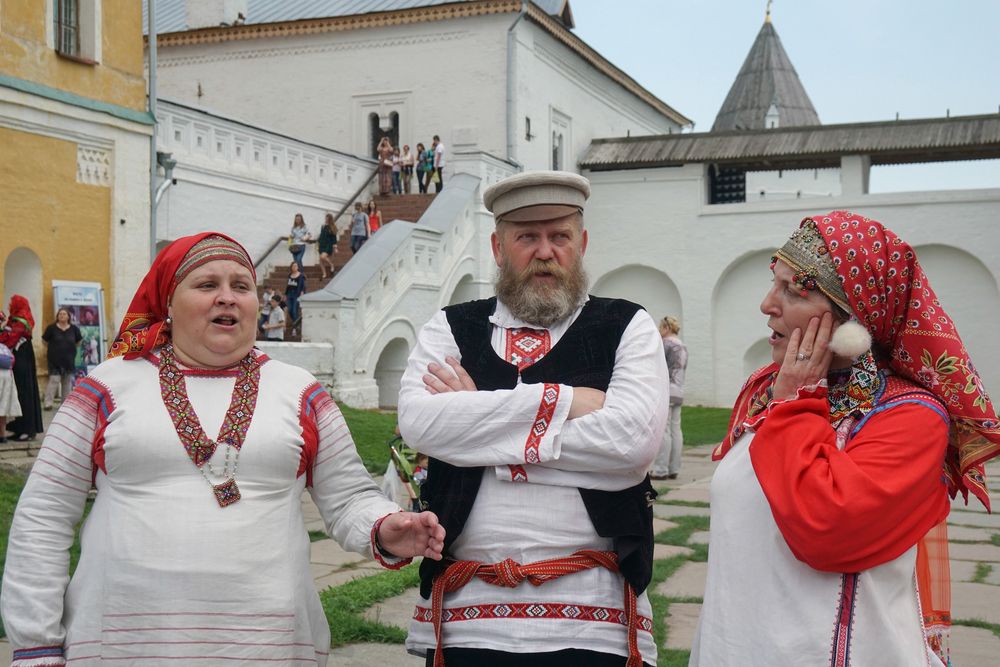 Besides the majestic Kremlin and monastery ensembles, many interesting monuments of religious and civil architecture have survived in Rostov.

The picturesque nature of the Rostov land, forests, rivers and lakes are of great interest for ecological tourism, hunting and fishing. Nowadays the area is visited by many hunters and fishermen.

Lake Nero, which to this day looks like Rostov the Great has been attracting people since time immemorial. And now the lake is of great interest to tourists. In summer residents and guests of the city can take a fascinating voyage by ship on the lake. This walk will leave a lasting impression on you. 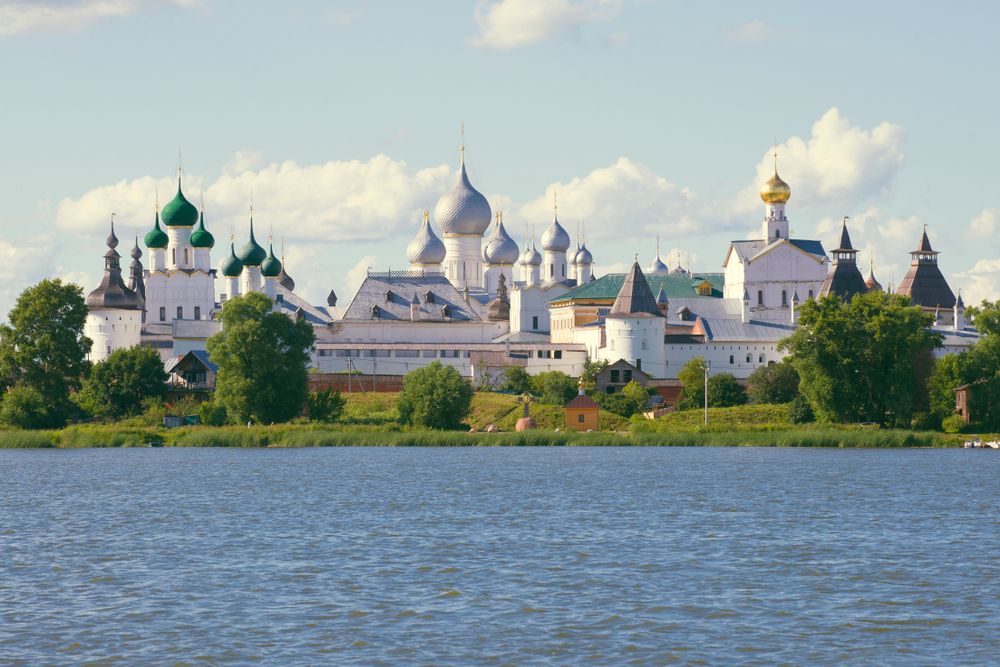 View of Rostov Veliky while walking along Lake Nero

In a picturesque place on the shore of Lake Nero under the walls of the Kremlin is a house of creativity ‘Khors’. There is also a Home Museum of Russian Household, recreating the interior of the 19th-20th centuries and collecting exclusive and rare household items. On the 2nd floor, in the gallery “Horse”, there is an exhibition of modern art and a permanent exhibition of artistic enamel.

Today Rostov citizens take all efforts to preserve their city and make it attractive for tourists. Systematic work to improve the appearance of the city and its historic monuments is conducted. Pedestrian zones are created, buildings are reconstructed, areas are improved, facades of buildings in the historic part of the city are put in order.

New hotels are built, the chain of restaurants and cafes is constantly evolving, and the level of service is improving. So tourists visiting Rostov can not only enjoy its beauty, but also have a good time and have fun.

A hotel in Rostov

Every year the city holds the traditional festivals, which attract many tourists to Rostov. There are many cultural events on the territory of the town: winter holiday ‘By the will of Chuch’, Shrovetide festival, Day of the town ‘Colors of the fire’, International music festival ‘Living antiquity.

The annual merry “Green Cucumber” festival in Porechye has become a tradition. Porechye is the largest village of the Rostov region and the homeland of vegetable gardening in Rostov Land. There is an interesting museum there, the ‘Porečský ogorodnik’. You will have a real Russian tea drinking: herbal tea, honey, baranki, and of course, heart-to-heart talk.

A visit to Rostov would not be complete without visiting the Trinity-St. Sergius Varnitsa Monastery, built in the village of Varnitsa, the birthplace of St. Sergius of Radonezh. It is a holy place for every orthodox man.

Come to Rostov! A visit to Rostov will leave a lot of impressions and you’ll want to come back here again!